After the initial feline meetings which consisted of unceasing growling on Kitten Beya’s part, and occasional hisses, but mostly retreating and stalking, on the big cat Citrus’ part, and after careful gradual introductions and co-feeding, a détente seems to have been reached.

Noses have been touched, and playing together has happened.  Although we still separate them when no one is home, since occasionally adrenaline seems to run high.

And the big cat sometimes gets a little weary of attention paid to kitten, and kitten antics, and kitten growling. 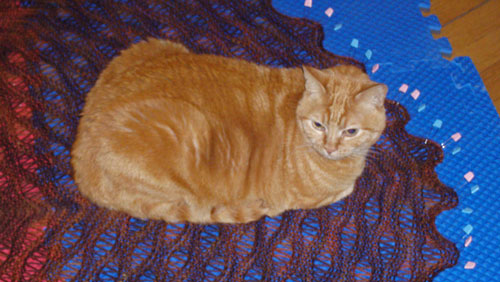 Great Flaming Hairballs, what IS she doing now?

So, the bad news?

For the last several nights, my husband has been complaining of his legs itching.  He has psoriasis (though it’s usually not seriously itchy) and the weather has suddenly turned cold, with accompanying dry air, so I didn’t think much of it the first night.  But the second night, or rather yesterday morning, he said his legs itched so much it was driving him crazy, and he couldn’t fall asleep, so dozed on the recliner after taking an antihistamine.  So last night I looked at his legs.

The red spots weren’t all psoriasis.

Miss Beya has two little bald patches on the backs of her legs, where she had cuts when she was found.  I just thought it was still healing.  But (though she hasn’t had her vet visit for this yet, it’s scheduled for day after tomorrow), I’ve now read that ringworm often or usually enters the skin in cuts or non-intact skin (and of course, I knew that kittens were very susceptible); in cats it shows up as little hairless spots, or causes no symptoms.   (They don’t seem to get itchy.)

When Beya and my husband were hanging out together at the studio, my husband often had his shoes and socks off; Beya loved to wind around his feet; and his psoriasis on his legs is non-intact skin, plus he puts a steroid cream on it as needed.  He was a set-up.

Good news: none of the rest of us are showing any signs.  Bad news: I bet the two cats have had just enough contact that the big cat is at risk (whereas 3 days ago, they had not had any interaction).  Good news:  Kitten has been kept in the bathroom, easy to bleach and disinfect (ringworm, despite its name, is a fungal infection).

Bad news:  my husband wouldn’t let me take a picture of ringworm legs for your edification!  (I would probably have linked a photo so’s the squeamish weren’t confronted with it, but it’s probably good to know what it looks like.  Since obviously *he* didn’t recognize it….)  He looked at me with utter disbelief when I suggested taking a picture.  Some degree of profanity occurred, even, I believe.

He just doesn’t get this blogging stuff, does he?