Say It with Flowers 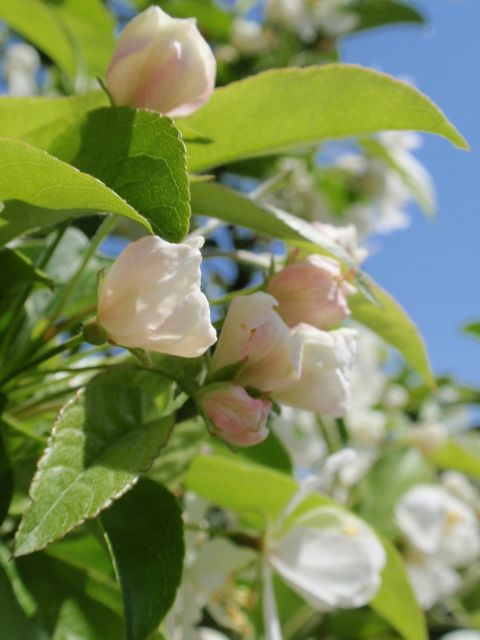 “Happy Mother’s Day”, that is!

The flowering crabapple tree is one planted in memory of my mother-in-law, Helen, whom I was lucky to know for the years that I did.  With this early spring we’ve had (despite the frost and snow of the past few days), it bloomed several weeks ago, gorgeously. 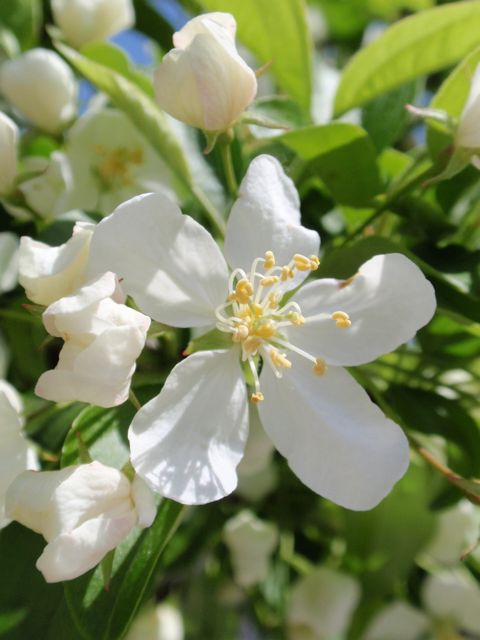 To all readers who have mothers:

And for all mothers who are no longer with us: 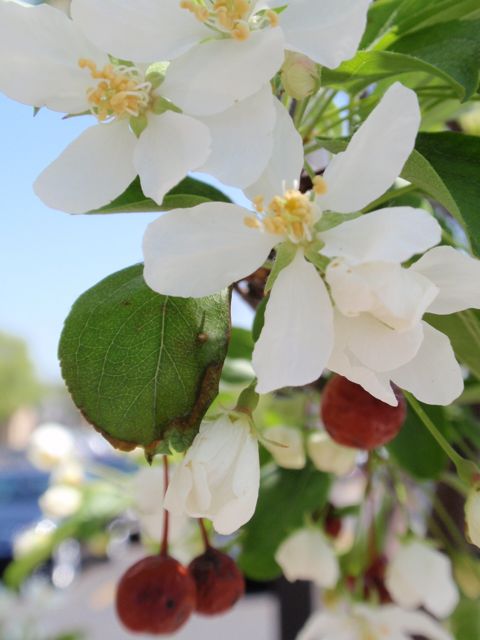 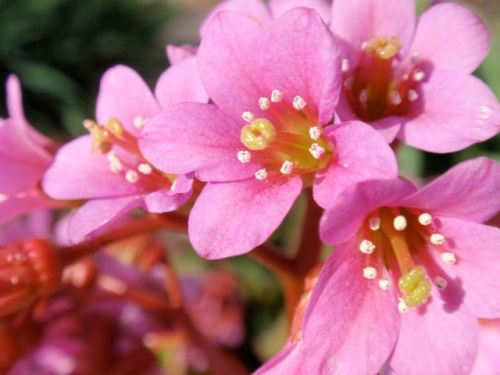 Certainly spring-like!  Bergenia, from my garden.

From the Sublime to the Ridiculous

You will come to understand the title of this blog post….but you’ll have to keep reading!

A (what was intended to be brief) wrap-up (I hope) of Sock Camp. Maybe.

I hadn’t shared yet that I went out a day early, just to see friends and hang out in the wonderful Seattle area, since there would be no extra time at camp, nor after. (On the way, I saw this mysterious communication at the Minneapolis airport. 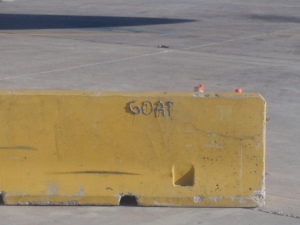 My friend KT sweetly picked me up at the airport, took me to lunch at Pomegranate Bistro (NOM!), and thence to her house for a couple hours of knitting and talking in her crafty hideaway.  (The mother-in-law apartment in her house is her craft area.  It is awesomeness.  Not just for knitting, but for quilting and all KT’s other artistic endeavors: she is incredibly creative.  KT is a sock camper also but went the second session, so we were not going to see each other otherwise!) I also was a magnet for her beautiful cats, Frog and Tink.  😀

KT then, in a demonstration of true knit-sisterly love, drove me to my friend Astrid’s house through rush hour traffic on I-5 in the rain, with her two young men in the back who did become slightly bored with the process, small gentlemen though they are.  KT, you are a saint!

Thereafter, Astrid and her husband Greg very generously fed me and put me up overnight.  After a wonderful meal, the usual engaging conversation that occurs any time Astrid and Greg are in the room, and a stormy night/early morning, which I slept through most of, an absolutely gorgeous morning greeted me.  At which point, I remembered my camera…though I just realized I haven’t yet taken a picture of the way cool hand-dyed yarn that Astrid gave me!  (But it’s somewhat similar to this one in her etsy shop, but without the sparkle, and more colors.  Very pretty!  I love it!)  Here’s the view from Astrid and Greg’s deck on a stunning Seattle spring morning: 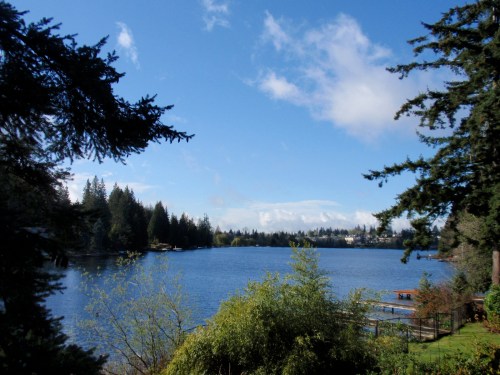 A few remnants of rain 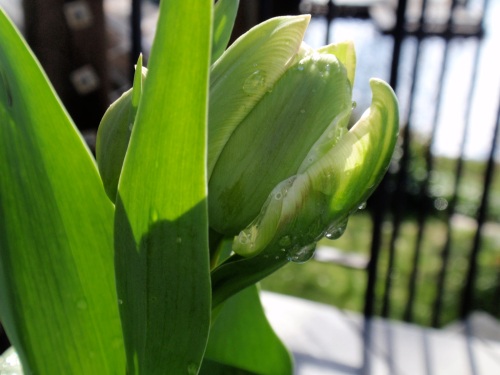 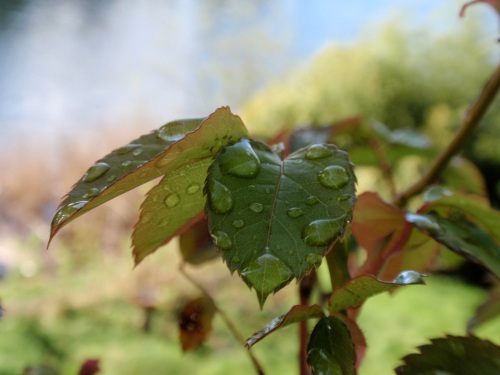 soon evaporated, and after a lovely breakfast, Astrid continued her generosity by driving me to Sock Camp at Port Ludlow.

We had a lovely trip across the Kingston-Edmonds ferry! 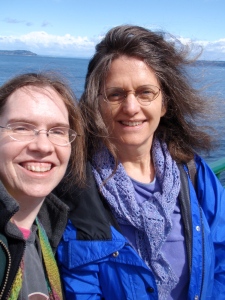 And I got to show Astrid around the Inn at Port Ludlow a bit before she headed back. 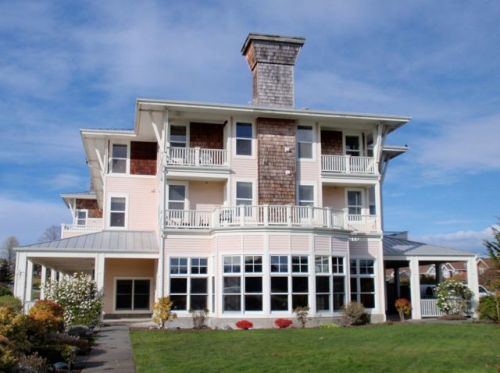 The mountains came out to be seen, for Astrid. 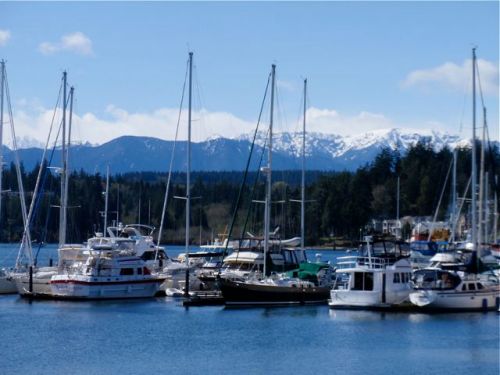 We got to see a sea otter swimming by the docks! 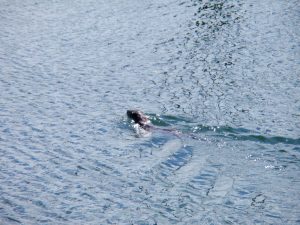 So, after hugs were exchanged and Astrid headed home, I explored a bit, took a few more pictures, 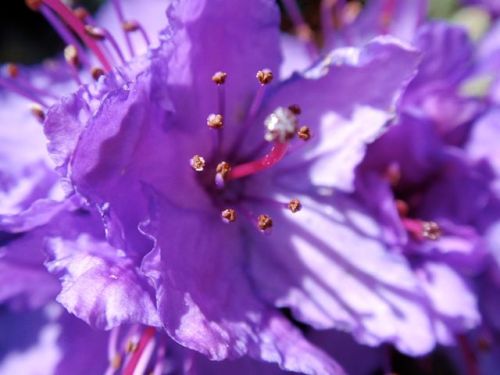 had dinner in the bar with new and old friends, and then that evening 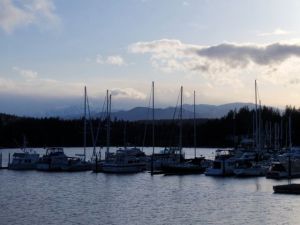 Sock Camp officially kicked off with a dessert reception and the sorting of the Tribes.  And the laying down of the Camp ground rules by Steph, baby Maggie and Tina. 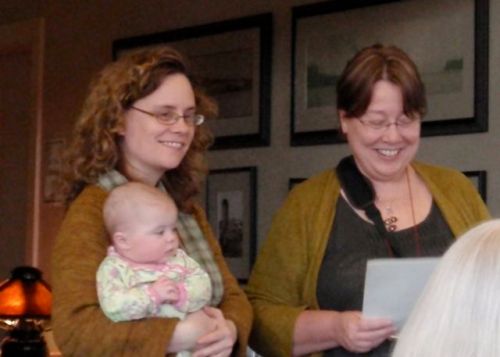 After that….it was kind of a blur.  Oh, gee.  I wish I could have blogged concurrently, there is still so much to tell you, but this post is getting too long already!  But one highlight was mid-camp: the Talent Show.  Wow.

The knitters who come to Sock Camp are an amazingly talented bunch.  Knitting, of course.  But in many other ways.  I saw Dorie’s incredible quilt that left me almost speechless….it took a third place at American Quilter’s Society’s Paducah show (this is A Big Deal in the quilter world, and if you saw the quilt, you’d totally get it.)  My picture is abysmal: 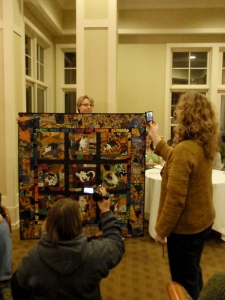 I hoped the Harlot would blog her photo, but not to date.  (The quilt tells the story of Bernard, the timid cat who dreams of Africa.) And then there was Anne’s artwork, of which my photos are completely blurry, but you can see it for real at the link.  Amazing.

If I had done my little talent show offering AFTER those — I’m not sure I would have dared to perform!  But, I deliberately signed up to go first.  My voice was extremely iffy, as I was just recovering from a prolonged bout of The Plague (OK, some nasty virus that settled in my lungs).  So I drank some bourbon and hot tea, on the advice of my musician husband (though not too much bourbon, or I would not have been able to stand, let alone perform).  And quick, before my voice ‘went’ any more than it already had:

I got up and sang a little song about socks.  Written by yours truly.

So now you see the reason for the title?  Between my last post with the angelic teen voices singing a lovely song, the beautiful scenery at Astrid’s house and at Camp, and then my teammates (Dorie and Anne were both Fellow Foxes in Socks!) with their incredible art….definitely The Sublime.

“Maybe This Time”. Definitely on the ridiculous side of the Sublime vs. Ridiculous scale!

(For the unedited song, with chatter before and after, including the American Idol-style “Camp Idol” judging by Steph, Tina,  and Stephen, see here…. this video also hints at the hidden story behind the name of one of Blue Moon Fiber Arts‘ newest colorways!)

The RockStar had a busy weekend (which means we did too).  Many dance classes & rehearsals (recital in two weeks), confirmation today with attendant events last night and afterwards today….lots of homework…and in between all of that, performing at State Solo and Ensemble competition, in a quartet with three friends.

(I have a bit more to tell you about Sock Camp, but family — obviously! — and work obligations have been interfering.  But I needed to share this with you first…)

On this glorious spring day yesterday: 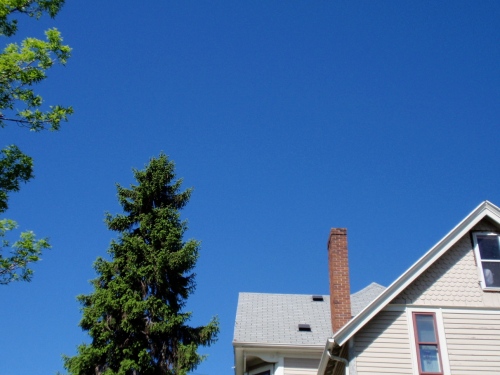 the RockStar and her friends stood up in front of a judge and a few others in a recital hall at University of Wisconsin-La Crosse, and sang Billy Joel’s “Lullabye”, a cappella.

It gave me goose bumps.  And I don’t think it was just because I was the mother of one of the singers.

(The judge seemed to share my opinion. They earned the highest score.)