Whirlwind tour of the last month as seen in Saturday Skies:

This Saturday just past was gray and cooler, but finally in the last few days I have seen incontrovertible signs of spring.

Buds on my mother-in-law Helen’s crabapple tree, among other signs.  Yes!

The  Saturday before, we (the family) were taking the train to Chicago for a special outing.  The girls had never been on the train before.  The RockStar, who was unconvinced beforehand, has declared it the only way to travel now!

(did you see the plane with contrail?)

and the sky behind Navy Pier on an early evening expedition:

The previous Saturday was the day I was supposed to leave Seattle (um, yeah.  More about that later).  A lot of moving from place to place that day, so multiple Saturday Sky pictures, actually.

Saturday Sky as seen from the Kingston-Edmonds Ferry, leaving Port Ludlow and Sock Camp: with another ferry in the picture,

I caught an airplane going overhead from the ferry also.

Later in the day,  Saturday Sky behind the EMP (Experience Music Project/SciFi Museum) and the Space Needle.

(You can see it was a gorgeous day in the Seattle area!  Of course: it was the day I was (supposed to be) leaving….)

Then, at my friend Astrid’s house:

No,  the spider’s not on your screen, nor was it in Astrid’s and Greg’s house, but on the outside of the porch sliding door!  Here’s a prettier view sans arachnid….beautiful lakeside sunset in a safe harbor on the shore of Martha Lake.

A week before, I got on the train in the evening to leave for Sock Camp, after a very busy day.  So the only picture I have of the Saturday Sky is a blurry twilight picture from the moving train, as we crossed over the Mississippi just after leaving the station.

Oh, and a picture of black almost-midnight sky over a different Mississippi River Bridge as we went through Minneapolis, a few hours later. 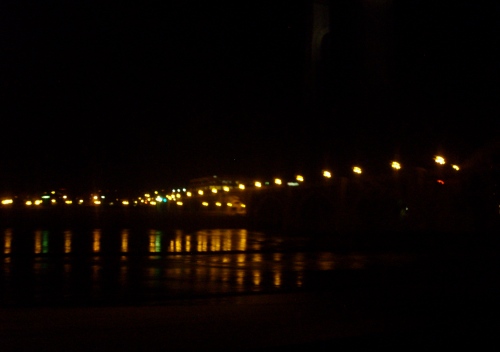 Yes, it’s been an eventful set of Saturdays!  Sorry to keep teasing about Sock Camp….despite kmkat‘s valiant efforts to persuade my work to ‘let her knitter go’, it was another busy weekend.  Besides which, I took over 1000 pictures at Sock Camp and on the train.  And, frankly, condensing does not come naturally to me:  I want to show you ALL the best pictures and tell you EVERYTHING!  But that would take a very long time.

If you come over and knit sometime, and want to see, I’ll show and tell you everything.  In the meantime, I’ll work on the Reader’s Digest version.  (Before I leave again on Thursday….)

Last week I was gone at an almost week-long educational meeting in Chicago, not a vacation, but it doesn’t matter whether it was work or play when you get back.  There’s still the same amount of catch-up!  It’s been a busy week this week.

I hope to share some highlights, and I will show you my meeting knitting (of course!), but in the meantime, here’s the Sunset Cityscape that I couldn’t show you last week for lack of a camera cable.

Chicago Skyline as seen from the terrace of the Adler Planetarium, September 18, 2008.

K is for KIP

Knit in Public, that is.

Of course, I was doing it long before it was an acronym; or had a day in its honor. I’ve knit in public since I was 19, I suppose (25 years, that would be). I was doing it just today:

I was also knitting the next ‘walking sock’, though I think this one is ‘meeting sock’:

I started it at the meeting (yep, more “Twisted” yarn, this one Netherfield colorway in the Kabam yarn base), knit while walking around the Chicago Loop this morning while there was sun and bits of a blue Saturday Sky,

knit while finding the Red Line subway entrances all closed for construction, knit on the bus that I therefore had to track down to go to Loopy Yarns late this afternoon…..I can’t, however, knit, walk, and hold an umbrella, which I also got to do today, as I was outside during the five-block walk from where the bus dropped me off to Loopy Yarns, at which point it started to pour and (I later found out) there was a tornado watch. Darn. (For the not knitting.)

The lace, by the way, is Wendy‘s lovely Diamonds and Purls shawl, which I have not been able to knit much on for far too long. The set-up charts required close attention, and even now, the edges of the pattern require chart-vigilance. I mostly don’t have that kind of protected knitting time at home, and it’s been so fun to be able to just bliss out in lace. I couldn’t knit it DURING the meeting, but at breaks etc., yes. 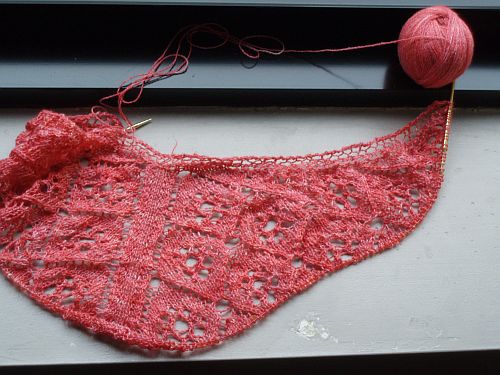 One thing about KIP’ing is the fact that people do talk to you about it, if you’re alone. One gentleman at my meeting who was sitting in front of me was very sweet; not only did he know that I was knitting without asking what I was doing, but he noticed I’d changed projects and thought perhaps I was done with my socks.

I have also had the usual inquiries about whether I was knitting or crocheting. I always smile pleasantly and answer. Ditto for what I’m working on, even when it seems terribly obvious, I generally don’t mind proselytizing a little.

One down side of KIP’ing showed up on the train, however. My seatmate for most of the trip was perfect; a pleasant woman with a book. We smiled, nodded, exchanged a couple remarks and rolled along in harmony and mutual side-by-side concentration.

However, she got off about an hour short of Chicago, leaving the seat open.

At this point, I had my el cheapo headphones on (quite visible) listening to Cast On on my iPod, and the lace chart on my lap, knitting with easy concentration. I had a flow going. Life was good.

An elderly woman who HAD A SEAT ELSEWHERE decided to drop down next to me, because, apparently, she was bored.

“Is that knitting or crocheting?”

Knitting. (Usually, I’m a little less taciturn, but I’m trying to listen to the podcast, and it was at a funny part.)

“What are you knitting?”

“Could you crochet that too?”

Yes, there are a number of ways to make lace, though I don’t really crochet.

No, I make them for friends.

“What kind of yarn is that? Where did you get it? Can you buy it in any store? Where was it made? What’s it made out of? Is all yarn like that made out of wool and silk? What’s that on your lap? What does it mean? Is it the directions? I don’t understand it.”

(Fill in the blanks; and even when I said pleasantly but firmly that it took a lot of concentration to read the chart, she would NOT stop asking me questions. Through the headphones on my ears.

Sure enough, eventually, under this barrage, I messed something up and had to tink. It took me a while to figure out what I had done (something involving a double yarnover, I believe, had gone awry). She stopped talking briefly for a bit, watching me un-knit, frown, re-knit, frown, do it over.

Once I had it fixed, I had finished the set-up charts. Given the fact that I had just messed up (pretty much for the first time knitting this pattern, other than a fagoting slip or two), I decided it was a good time to get up, stretch, hit the bathroom.

When I got back, she was gone. Hallelujah! Now I can knit in peace again! 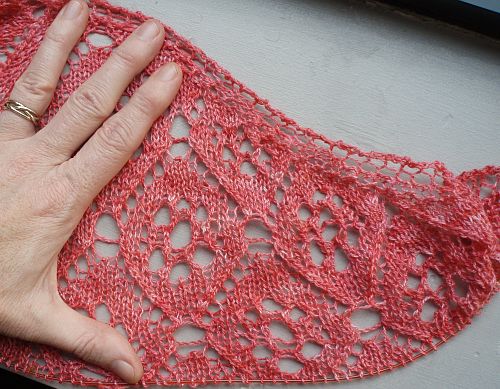 So that’s about the worst experience KIP’ing I’ve had (other than losing knitted items under my chair while imbibing and knitting, and having a baby hat in progress permanently stained when a freak thunderstorm came up and it got splashed with mud, and, you know, the usual escaping yarn balls (one rolled down a few rows in the movie theatre once)).

The great part about KIP’ing?

Getting projects done! If I didn’t steal time to knit, I’d accomplish very little. And giving me patience! If I have a small project with me, I can happily stand in line, wait for the Preteen, listen to other people’s children play their brand new band instruments, wait for appointments. If I don’t — torture, it’s all slow torture.

The absolutel best most fun KIP’ing?

Doing it with other knitters!

Next Saturday, June 14th, is WWKIP Day — World Wide Knit in Public Day. IIt’s also Stephanie Pearl-McPhee’s 40th birthday, through some kind of karma thing. Check out her blog if you are a knitter, and happen to be anywhere near Toronto — there’s going to be a big knitter’s party!)

Last year, I was lucky enough to be in Chicago for WWKIP Day, where I and a Whole Bunch of Knitters gathered in Millennium Park to knit in solidarity. 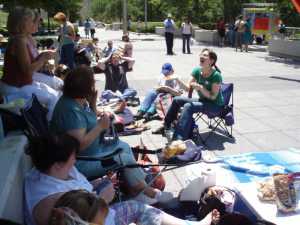 was there, and I met Angela and Nat and Karen and Mary and it was wonderful, though my time was cut short by the call of matinee tickets to Wicked.

This year, I’ll be back home and I have the weekend off (my last then for six weeks, gah!). Though I KIP pretty much all the time, it is so much fun to do it Representing, with people who get it, as my uninvited train talker definitely did not. My friend Karla and I have talked about going to one of my favorite LYS, Ewetopia in Viroqua (well, it’s not REAL local, but worth the drive!), where there are WWKIP Day festivities! Hooray! I think this calls for my knitting temporary tattoo to be applied again. And one of my knitting T-shirts to be worn!

So next Saturday, knitters all, go out there and KIP if you can! Represent boldly and joyfully! At the coffeeshop, the LYS, by yourself, or hopefully with knitterly friends — but go forth and KIP!

And send some good thoughts my way that a certain elderly lady won’t be on the train back tomorrow…..