Speaking of Legacies, I had to show you a detail from the 10-year-old Gothlet’s latest creative endeavor, which she brought to school for an assignment yesterday morning.

She made a panorama depicting a scene in Inca life.

During which, she learned something (and so did I, not that I was in on it from the beginning).

If you are making figurines that are designed to stand, oil clay is not the best medium.  It stays flexible….

Then your Incans get seasick and try to ralph over the side of your panorama (photo courtesy of Gothlet again). 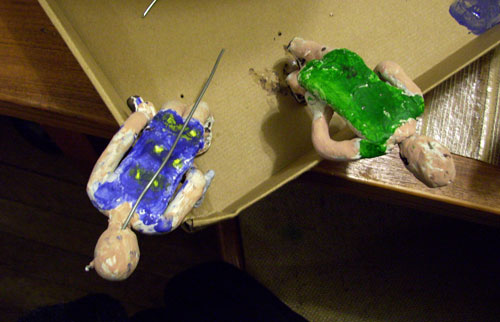 No, we’re not pithing the one guy.  The Gothlet was doing this entirely on her own till this point, but asked for help at the ralphing point.  So I impaled Mr. Blue a little more directly and we did get them standing.

But that’s not what I wanted to show you.

Each of these feet (I think these are of Mr Blue again) is way less than half an inch wide.  The little toes are a millimeter or two. 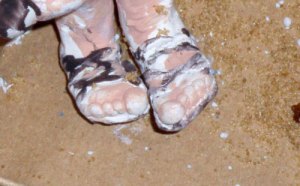 Look at those sandal straps, which are about the same width.   The painting precision was hindered by the fact that the paintbrush was a lot bigger than the sandal straps.  But I would call that significant attention to detail.  (For scale, that’s brown sugar sand next to the feet.  I saved it from being eaten by the Gothlet’s classmates by mixing it with kitty litter too — and warning them thusly.)

She spent all weekend making five Incans and their boat, and they were awesome.

Next time, however:  she is definitely using clay that hardens!

Today:  one of her pieces of art goes on public display, and there is an opening reception to go to this afternoon.

Yep; definitely an artistic streak there.

Thanks for all your comments yesterday!  My aunt has all the squares stlll; we”ll have to consult about her feelings about the grey square.  This is the French and not the German side of the family — a little more laissez-faire, n’est-ce pas?  I do like the idea of the afghan telling my aunt Barb’s story.  Then the grey square would either need to go directly front and center; or right on one corner.   Hmmmm.  And thanks to Deb and Helen (of Troy) for doing all that research and giving me multiple counterpane tips!   I don’t think you’ve seen the last of this legacy….