Last week, I went from a week at work where it seemed that every day only got busier and busier, directly to the train station to take the Empire Builder train to BMFA Sock Camp, where I just arrived today.  There was no internet access on the train, so this is my first chance to catch up.  Thus, I have a number of color studies still in my camera and locked in my home computer.  Sigh.

Well, I essentially did a color study last year for a reason unrelated to color (one of my posts for the ABC-Along).  And since these colors are pretty much non-existent in nature back home this time of year (though they do exist here in the Pacific Northwest!),  I can’t take these photographs right now.

So I present to you with the aid of a blast from the past:  Bright and light colors!

The Colors of Flowers. 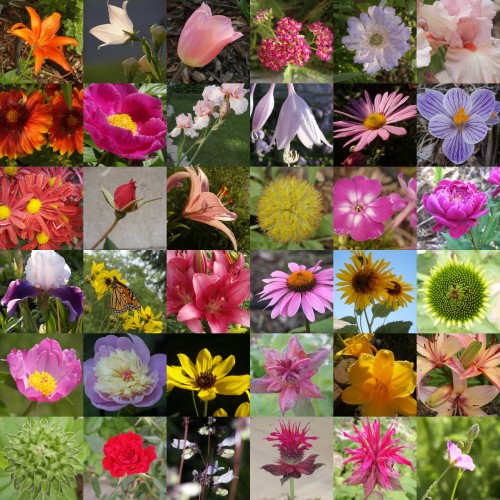 All these are flower photographs I took from flowers in my own garden, within the last two years.  My garden is somewhat random, not planned around much of anything other than easy care, frankly.  And blooming time: I try to have something blooming most of the time during the all-too-brief Midwestern growing season.  So it is interesting to me that so many of the flowers are warm colors: yellows, oranges, pinks.  Because when I pick out yarn, or clothes, these are not necessarily the colors I’m drawn to at all, other than red, which I do like very much in anything.

But this collage still makes me very happy inside, just to look at it.

Especially in March of the winter that wouldn’t end!

I took a whole bunch of Saturday Sky pictures the Saturday before last; it was just that kind of day, even though busy.  Last Saturday, not so much.  But the two together: a good exploration of color in nature. Sounds like my camp homework!

Last Saturday WAS a beautiful day (though I missed the sunset by being at a Celtic music concert, the Boys of the Lough).

And the lilac buds thought so too.

Look how the different shades of blue give the sky depth.

The weekend before last’s Saturday Skies:

when I got home from work: 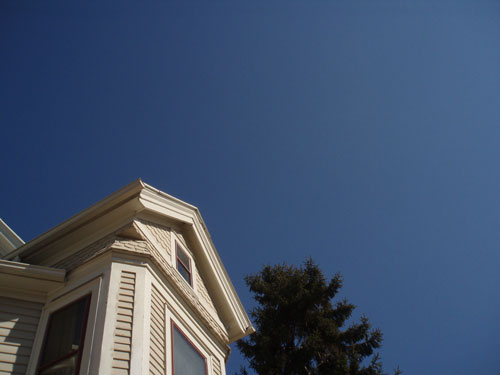 and later, when I prepared to leave (late) for the Twin Cities, to go to the Bohus exhibit I told you about, the next day. 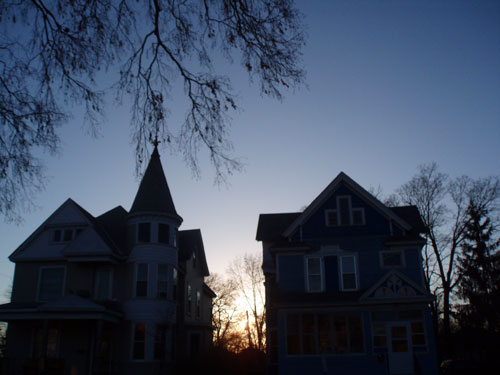 The sun was setting as I crossed the bridge across the Mississippi River into Minnesota.

But I had to stop and get out of the car as I drove through the Mississippi River backwaters in the area between Wisconsin and Minnesota; it was so gorgeous.

The ice was leaving the river and the backwaters.

There were so many birds!  Geese, many geese,

but I also saw flocks of seagulls, solitary hawks, an eagle, tiny birds.  And can you see the red-winged blackbird back in his perch on the edge of the marsh?

He’s in the tallest tree.  Here’s another one, below.

However, the night was definitely falling, and I had to hurry on my way

Only to stop one more time at that incredible silhouette of the Minnesota plains farm against the dying sunset, that I showed you last Friday; another, closer, view:

The next day, in addition to the Monkey socks I showed you, and the Gothlet’s gauntlets, I also had with me a new project, my first Baby Surprise Jacket.  (I’m certainly jumping on all sorts of bandwagons now, aren’t I?  How many years behind the times?

Here it is as of last week, posing on the car hood like the Monkeys did. 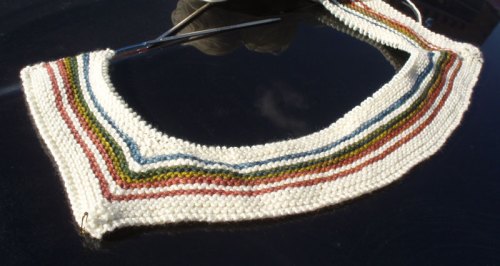 This is a combination of some mill end Socks That Rock heavyweight — I’m not sure if it’s undyed or if it’s a Spirit colorway that’s so faint, I can’t see a color — and the Twisted Duchess in Rodney that I showed you earlier as a cardigan and frogged.  I’m liking it in this combination.  Sadly, it no longer looks like this:  I had to frog it.  I can even see the mistake in this picture — now that I know what I did.  In this pattern, you increase after 5 garter ridges, on the short ends.  I did it on one end, but not the other.  The far end doesn’t look shorter just because of perspective; it really is shorter!  Unfortunately, because the pattern is mindless knitting after that row until row 44, I didn’t figure out my mistake until row 44.  Dummy me.

Well, that let me change the placement of the color band, anyway; I decided to move it up a little.  And I could have woven in the carried yarn a little better.  So it’s OK.  But it was a fair amount of frogging….I’m just now to the color band again.

And the coworker for whose baby I’m making this went and had her baby early, then, in the meantime!  (Not excessively early, just definitely before her due date.) So I didn’t get it done to give her in the hospital, obviously.  Since it’s going to be probably a 12 month size or so (and he’s a very average little guy), I will slack off my rush on this, I guess.  It’s good meditative knitting.

So, the other knitting-related part for the center of this Blog Sandwich is a follow-up to the Knit-Out also.  The day after the Knit-Out, I got an email saying that I had won a door prize, donated by the Minnesota Knitters’ Guild.  Since I wasn’t local, they were willing to mail it to me (though the American Swedish Institute didn’t actually tell me what it was).  The package came at the end of the week, and it was so cool!

A sturdy knitting bag, with all sorts of cool pockets,

And a great knitting notebook.

Anyway, after leaving the event that I won the above at, though I knew it yet not, I drove back down, this time along the Mississippi and stopped once for a couple more pictures, though it was no longer Saturday and the light was failing: 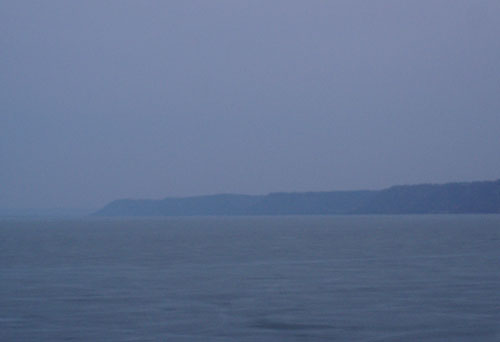 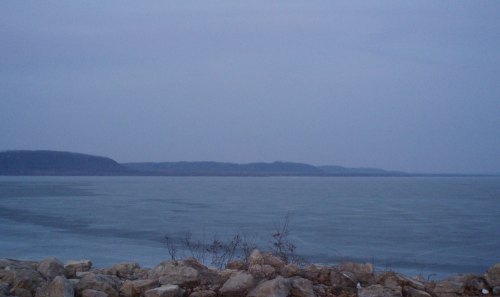 (the Mississippi at Lake City, where it widens)

So: many lovely shades of blue above: but there are so many more; an almost infinite series just in the Saturday Skies I’ve photographed.  Thus I decided to make a mosaic out of all the Saturday Skies I had photographed, since I started doing so in 2007.  I had to winnow it down to 36 photos, though, for the mosaic.  So I eliminated all the photos that had significant non-sky content.  And all the sunsets and sunrises, as this is a blue-gray nature study.

After ruthless pruning, here is my Saturday Sky photomosaic:

(Made with kd’s mosaic maker)

I love how, as I said above, the blues and even the grays always have shading.  I think that’s one of the characteristics of color in nature, but especially of color suffused by light, as the sky is.  None of these are an even, flat, smooth blue or gray; there is always a gradation.

Must be why I prefer hand-dyed yarns, even in solids.  Flat seems boring now (I’m spoiled); subtle tone-on-tone adds depth and light and interest. Hmm?