Today’s Saturday Sky (Skies) I actually got to see, before and after work: 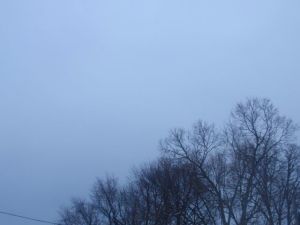 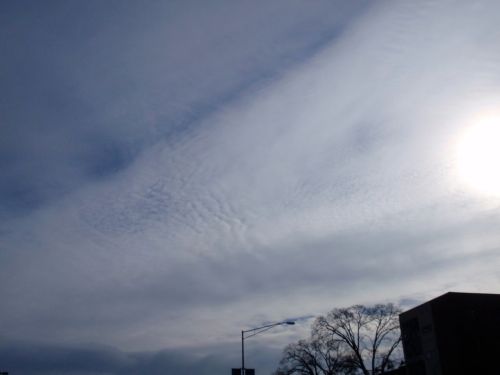 Glimmers of blue around the high clouds later.

As the flurries came and went,  chased by a north wind.

However, last weekend, I only saw the sky in the early morning.

That’s because after work, I spent the rest of the day indoors, watching this:

Yes, the show choir competition season has begun!  The RockStar is in the varsity high school show choir this year, as a sophomore.  Rehearsals started late July, believe it or not.  Competitions run through March.  Weekends are going to be a different proposition from now until then…

She loves it, though.

And, as an excellent dancer, she is in the front most of the time, and has two dance solos as well.  Brava! 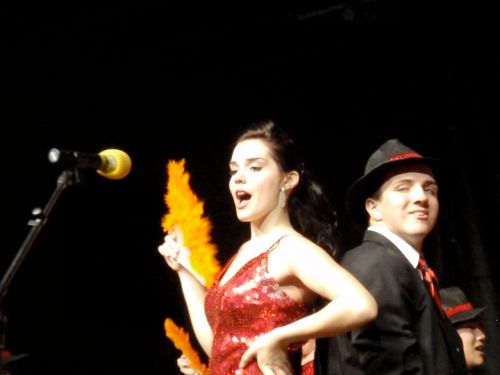 I spent the rest of my day after work at the competition, which was local; the show choir performed in the early afternoon, finalists were announced at dinnertime, the choir performed again in the finals in the early evening, and then the results weren’t announced till after my bedtime.  (Their choir did well overall, placing fourth among 16 or so (I forget exactly).  Plus one of their vocalists was selected ‘best female vocalist in show’.)  Long day for everyone.  But I hung in there…. aided by knitting.

I worked on my Aestlight Shawl, my third iteration of the border, trying for smaller borders taking up less and less yarn since I am running short.  This border, I ‘unvented’, in the words of Elizabeth Zimmermann, though I am sure it’s published somewhere. 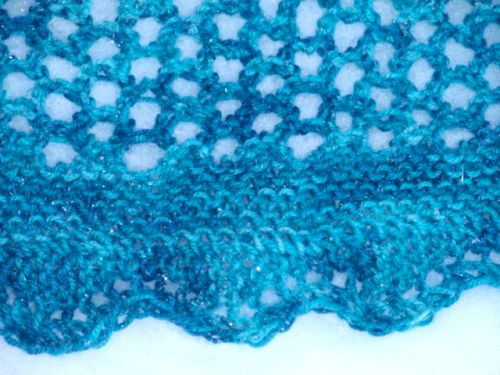 This is as small as I think I can get the edging and still have it balance the body of the shawl.

And I really like knitted-on edgings, which is what the shawl calls for in any case.

So do you think I’m going to make it?

More yarn is coming from the dyer!

What a Difference A Week Makes

A week ago, palm trees.

At about 7 am, halfway to Altoona, Wisconsin.

Why Altoona?  you may ask.  Reasonably enough.

Well, The RockStar (teen daughter) had a show choir competition, and had just found out a couple days ago that she was going to be singing a vocal solo.  I didn’t think I could go up to hear her do it (I wasn’t sure if she was going to keep performing it in the show), but circumstances changed and I was able to.

Without her knowing (the group had gone up the night before, for an early morning performance Saturday), I drove up with my father to see her and the show choir perform.

This is her thing, sure enough.  Or one of them.  She’s very good at it!

Nor does she suffer from any excess of shyness . . . perhaps that comes across.

P.S.  If you didn’t know there was an Altoona, WI, you’re not alone.  It’s a small former railroad town outside Eau Claire, 1/10 the size of Altoona PA.  But now I can say I’ve been there!

Last night was my 13-year-old daughter, the RockStar’s, first public show choir performance of the school year.    (And so it begins.)  (Actually, it’s relatively mellow at the middle school level.)  But she had a crazy end-of-the-weekend — which meant I did too.  All weekend gone at a confirmation retreat (and it’s kind of like sleepovers, they tend to come back sleep-deprived from these); arrive home well after the time she’s supposed to be at the performance venue (her director knew this would be the case, but the retreat took priority); speed make-up and hair (oops, dress should go on BEFORE the hot rollers — I could have told her that), and onto stage without having a chance to rehearse, to perform 5 songs (the other middle school did 3) during one of which she sang a solo.  After a dinner break, do it again, then immediately leave for a Nutcracker rehearsal that she was also late for.  Poor RockStar.  (And I don’t say that very often.)  Of course, assisting with that was most of my Sunday afternoon/evening too.

But the concert was great.  This was part of a fundraiser for one of the high schools’ show choir, so also in the concert was that very highly regarded HS show choir, their girls’ show choir, and a second middle school choir.  I enjoyed all the performances.  My husband and other daughter chose to come to the later show and just hear the RockStar’s choir.  They’re not so much into the show choir thing.

And I could knit a bit here and there.  (Lots of waiting time, and a lasagna dinner after the first show.)

So what am I knitting currently, now that the Coulee shawl is off the needles?  (Speaking of which, my only photographer around yesterday afternoon was the Gothlet.  She was willing — she loves photography.  A quick glance at the results on the camera showed that my 10-year-old takes pictures at least as good as my husband does, I think.  But the pictures are on her brand new camera (she’s been working hard and is a good saver!) and it doesn’t play well with PhotoShop as far as uploading automatically.  So I have to wrestle them out when I have time.  Which obviously I didn’t last night — the shawl photo shoot was in the 5 minutes before the RockStar got home.)

Also, I started a scarf two days ago.  Once again: there’s a story.  (There’s always a story.)

When the Gothlet was with me at Ewetopia Fiber Shop last Friday during spinning intro (and also, Kathryn had asked about Rhinebeck, so she and her mother got subjected to Rhinebeck show and tell for a bit), Gothlet got a bit bored since there wasn’t the opportunity for her to get her hands on a spindle right then.  So — I had an inspiration.

I had knit her this scarf several years ago (shown on frosty snowy grass): 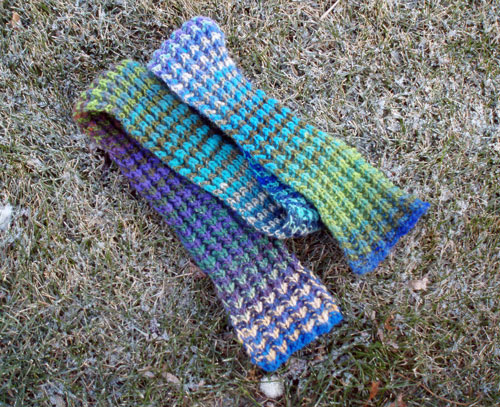 Well, the Gothlet has sensitive skin, and you know how Kureyon is.  Not the softest.  She loves it, loves the colors — but doesn’t wear it.

So EVEN before the Yarn Harlot’s recent post, indeed on seeing The Kat’s parade of lovely Noro Striped Scarves, after previously seeing them here and there in the blogosphere, I had thought about making her another similar scarf, but using Noro Silk Garden (I knit her the above right around the time Silk Garden came out, before I had seen or felt any), and probably using the single rib Noro Striped Scarf idea:  I like the pseudo-stockinette-but-without-curling look, the thickness of single rib, and ribbing doesn’t irritate me knitting continental, the way it used to knitting English-style.

Thus, I suggested to the Gothlet, to occupy her time, that she go find two colors of Silk Garden to make a scarf ‘like her old one, but softer’.  (And everything was 10% off that night!)  She was extremely willing.  And she came back with two skeins that I also thought were going to look awesome together.  Only problem:  I would want two skeins of each, to avoid a wimpy scarf.  And there was only one skein left of the one color.

However — I was 99.9% sure I had bought that same color of Silk Garden,  the last time I was at Ewetopia, a month or so ago: 3 skeins for a Pioneer Braid Scarf.  I was certainly willing for the Gothlet to scrounge one of those skeins; the Pioneer Braid Scarf was not yet designated for a recipient, and I was sure I could find another skein somewhere anyway.

So here is the Noro Striped Scarf, Gothlet style, which I knit on over the weekend in bits and pieces of time: 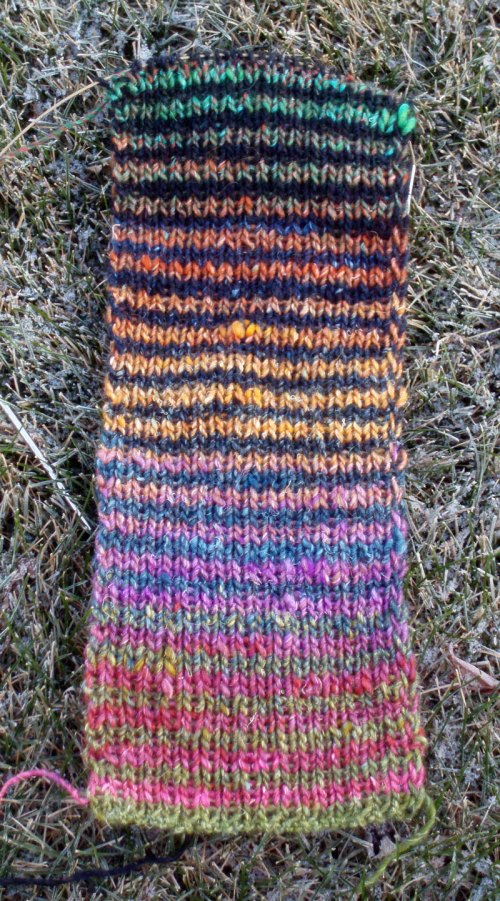 I think the Gothlet has a fantastic color sense.  Now, look at the skeins themselves.

I’m not sure I would have picked those two out — well, not the bright one (color 258).  (Obviously, I liked the other one, color 252.)  But they play really well together so far, and I think will continue to do so.  Not that La Gothlet minds some brightness and contrast, or what I might myself describe as clashing.

Anyway, she’s got an eye for color.  Whereas, the RockStar’s got an ear for music.  And my husband’s the cook — taste and smell? Besides the ear also.

Leaves me touch, as far as the five senses, I guess.  Mmmm, I love me some nice soft yarn.  Or fiber, now, too!  And I can knit by touch.  Fair enough.