to your nose and eyelashes, and your daffodils and your hair, and your car….

Yes, another weather post. My next post was going to be about Sock Camp and its prelude, but instead Mother Nature got a wild hair and dumped this on us yesterday. 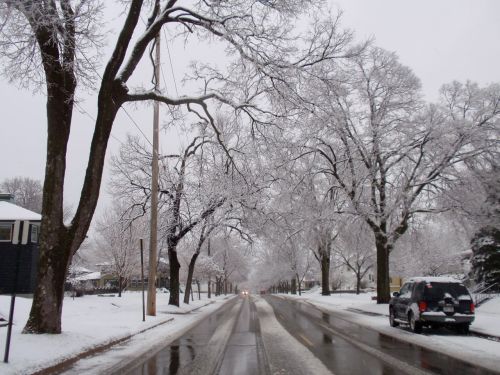 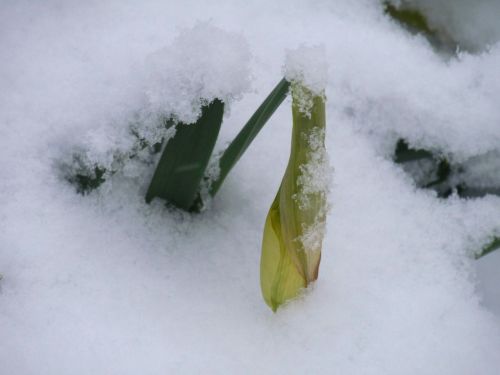 And….sadly, last night I and my two daughters had tickets to go see Elton John, right here in our home town. But the concert was cancelled due to the weather (as were many other events around town; in the afternoon, when his plane would have been landing and some would have been traveling, the snow was coming down thick and fast). 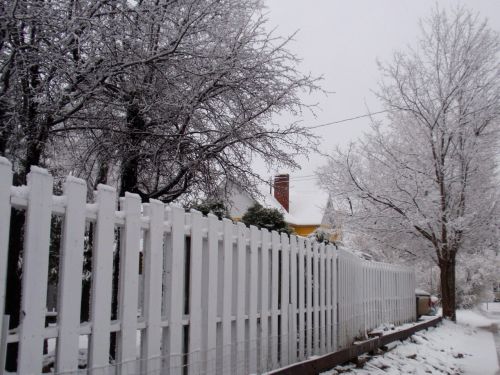 Boo! As some of my friends said, better a concert cancellation than that La Crosse become Elton John’s Clear Lake…. 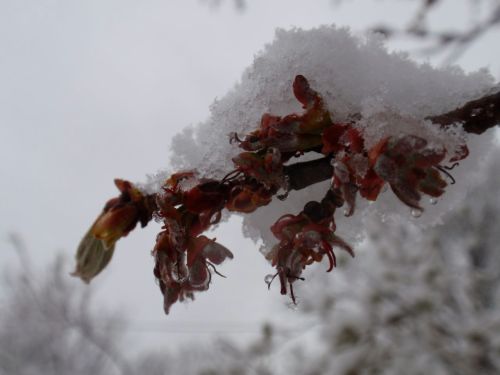 If there is a bright side to all this (besides the fact, which I am somewhat unwilling to admit, that it was pretty and will go away fairly quickly), it is that the snow allowed the RockStar to wear her new mittens again! 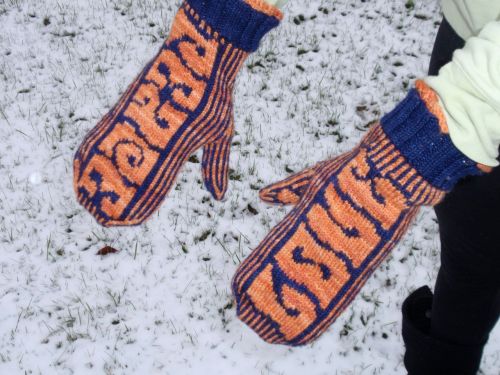 (Not actually taken yesterday but during a previous spring snow!)

Yes, I finally finished the Winter of Peace and Love mittens. Technically after the first day of spring. Though you can see how well THAT worked out. 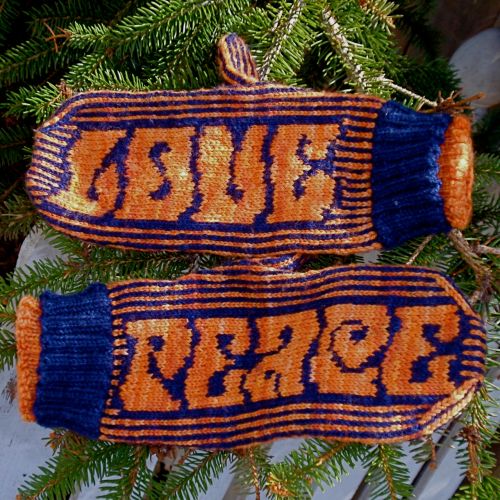 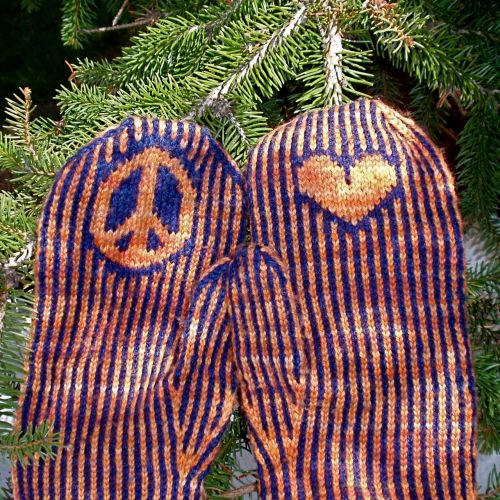 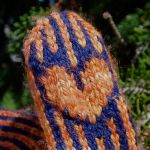 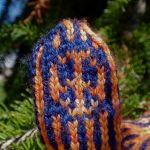 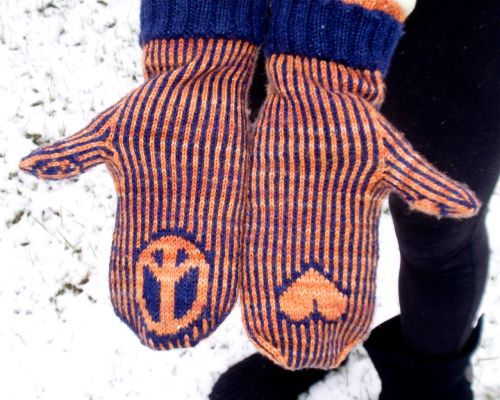 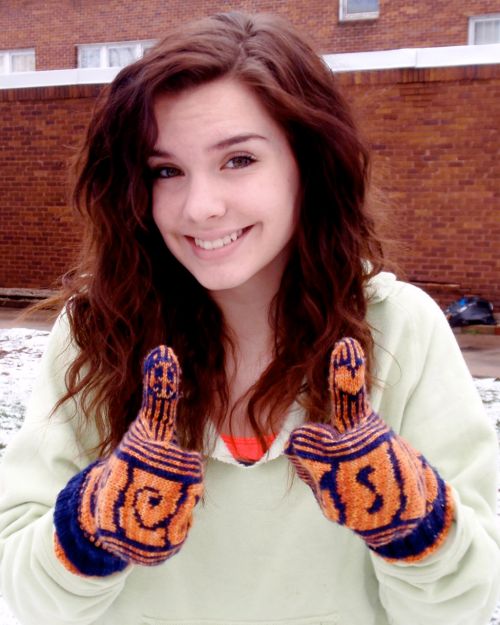 Or perhaps not as bad as it sounds.  Wisconsin weather, with a bit of knitting and travel thrown in!

I’ve been mentally working on Sock Camp posts, but at the same time physically fighting off a nasty respiratory virus, which has caused all my energy to go to trying to turn my lungs inside out.  Lots of medicine and time later, I am definitely on the mend, so take up laptop to try to begin to chronicle.  But first, since my last post, lots has happened here!

I had mentioned that storms were predicted soon in my last post, and indeed, the girls got to hear tornado sirens and head into the basement, for just about the first time that they remember doing so (the RockStar does have vague memories of her toddler tornado warning trip to the basement).  One advantage of a laptop and smartphone: one can keep track of the National Weather Service’s updates on what’s going on, as the winds whip up and the lightning crashes and the hail rattles down. 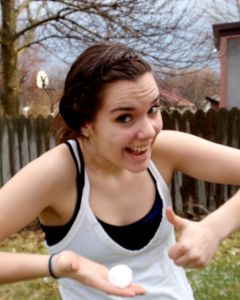 Our garage is a storage area, and my (new) car was thus parked outside, so I winced in the basement as I heard that hail crashing and bouncing and pictured my car in its sights. Amazingly, it’s almost impossible to see the couple areas where the body is ever so slightly rippled. Everything else except my daffodils was fine. I certainly know people who didn’t fare as well, with broken house windows and damaged siding. But no tornado activity was noted in the area (though one had been apparently spotted to our southeast). Thus the area lives up to its reputation and the legendary Native American saying, that no tornado will hit where three rivers meet….

The weather continued bad, but not that bad, through the rest of the week, and I certainly felt bad. Then yesterday, as I started to feel as though I was going to make it, I woke up to this Saturday Sky: 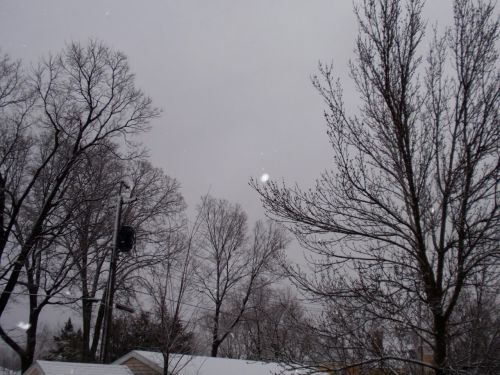 which had already dumped this:

The robins were not amused, let me tell you.

After I got over my own disgruntlement and worked yesterday, I stopped down by the Mississippi River, which is cresting well into flood stage right about now. Though the snow melted later yesterday, the weather continued blustery, with a cold north wind hurrying the flood waters along. 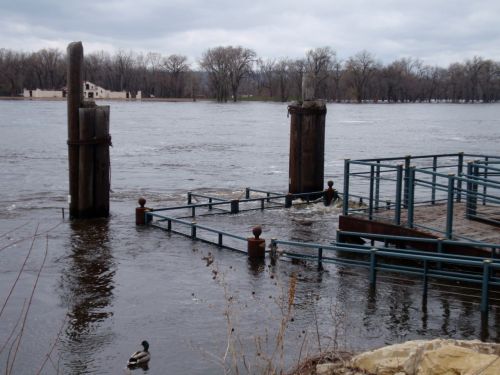 No viewing the river from THAT viewing platform today.

These rubberneckers were also checking the flood out. 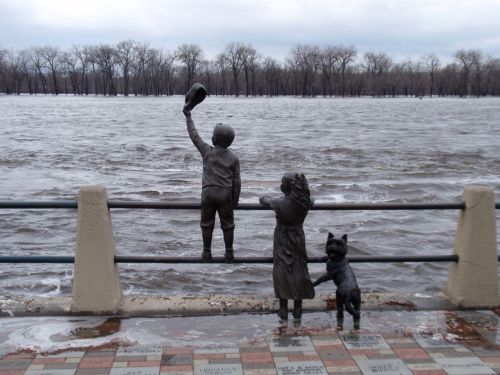 (To give you an idea of the river’s rise, here they also are in happier times two years ago. The brick walkway goes perhaps four or five feet below the river watchers, and the river is some feet below the edge of the walkway.)

In this picture, you can see the ramp down to the walkway….or part of it, anyway. 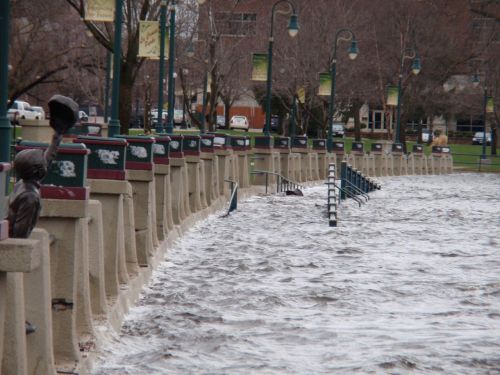 a view downriver a month ago, when the river was already rather high. 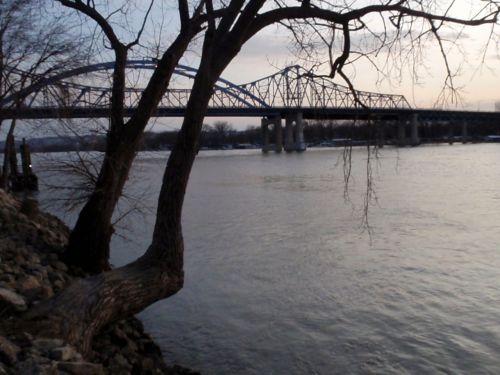 and the same view yesterday, with the same trees. 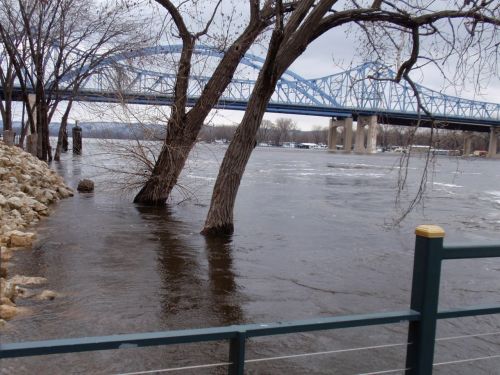 (Fortunately, our cold spring has caused the water level to not be nearly as high as it could have been, thus flooding has been manageable. Also, because my city has preserved the flood plains (they are primarily parks) and some wetlands to soak up the floodwaters, it tends to do better during floods than other communities on the river. Thankfully.)

All of this snow and hail and flood made me remember my time in the Pacific Northwest with fondness….even if it was typical spring weather there (cloudy, cool, on and off rain), or perhaps even more rain than typical. At least there was no snow, or hail, or flooding….

There were lethal creatures, granted. But that was kind of my own fault.

After seeing an old photo of my half-stuffed mermaid (homework from two years ago): I had an idea. I would knit a headless Jabberwonky, after the victorious knitter has beheaded it! Complete with gore….

This required dyeing wool top for the gore (I had some that had proved not so good for spinning, due to still having suint — sheep sweat — in it). It seemed to turn out well!

Simultaneously, I cast on with some Socks that Rock and knit a somewhat fearsome creature (with a picot-edge neck). And was, of course, still working on it when I arrived in Seattle the day before Sock Camp started, to visit my friend Astrid and her husband Greg. In between Astrid’s taking me to see the Nick Cave exhibit at the Seattle Art Museum, and an excellent lunch and equally excellent dinner, I knit away. And talked. Astrid being a knitter (and dyer) totally understood and kept me company by knitting herself as we talked; her husband is rather used to it, and accepted Jabberwonk-knitting unflappably! Also, Astrid had some awesome ideas for finishing strategies, and invaluably, had SUPPLIES! (Florists’ wire works better than pipe cleaners. Just FYI.)

On our ferry trip over to Bainbridge island the next day, the last bit of stuffing was stuffed, and my Jabberwonky was complete. 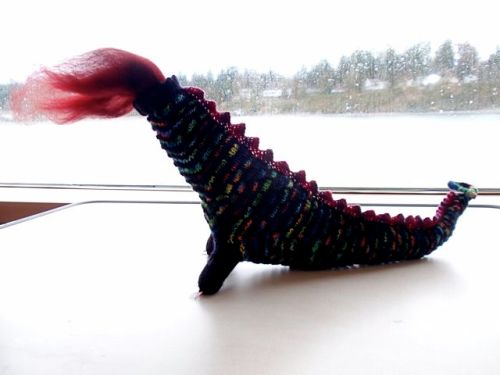 I can’t really say that Jabberwonky enjoyed the sights as we crossed Puget Sound to Bainbridge, since he’s headless and presumably can’t see; but I have to think he enjoyed the fresh air! Or something. 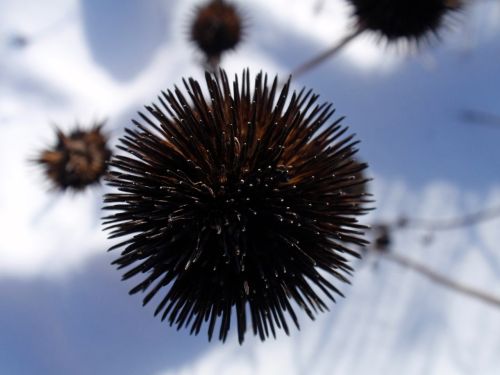 A Once and Future Flower.

My Aestlight shawl is all done except the edging! 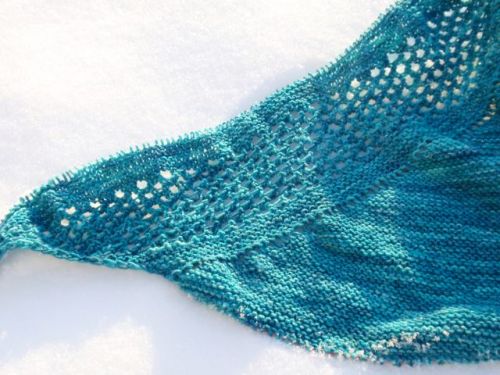 It sounds as though it’s almost done, then, doesn’t it?  Except that a knitted-on edging takes a surprising amount of time.

Also, more yarn than you’d think.  So now begins the exciting time of the shawl: 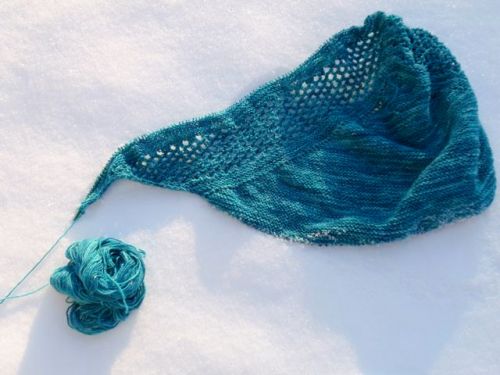 Will I have enough yarn??

I have weighed the yarn remaining before I started the first repeat of the edging, and I will do so again after the repeat is done.  The small scale I have is good to within 0.1 g, so works well for situations like this.  I should be able to estimate soon whether my yarn will hold out.

If worse comes to worst, I have the same yarn base dyed by Astrid in a deeper color that I could use as a contrasting rather than matching edging, I suppose.  It should be enough, by all rights, but we will see!

By the way, I am agreeing with Kat that this blue is unquestionably Caribbean.  Or at least tropical.  (Hey, Kat, here’s your white sand beach!  Right?!) Despite the fact that I started it at dawn by ‘the lake’, no Northern lake was ever this shade of turquoise.  I think I need a new name for the shawl!

Speaking of tropical, as I took these photographs on the new-fallen snow, I heard honking and looked up to see these somewhat belated travelers: 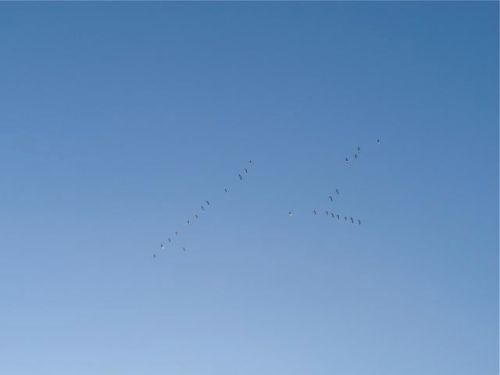 I don’t know why they waited so long, but at least they were heading south.

Give my regards to those turquoise waters, geese!

Yes, we had those flurries before….but yesterday, Saturday morning, I awoke to the first real snow of the season. 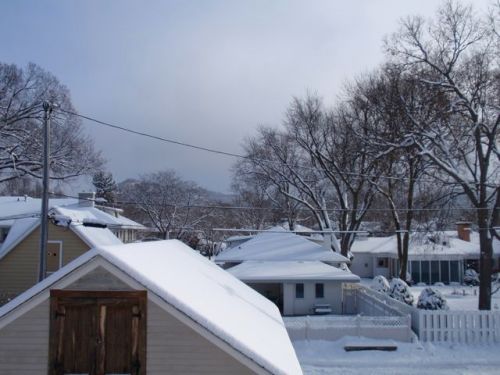 The Saturday sky started out cloudy, as it continued to snow in the morning, and then gradually cleared up as we dug out. 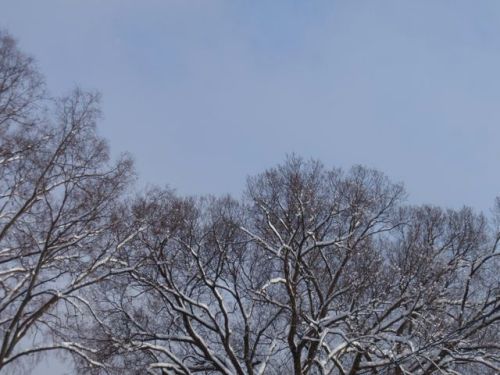 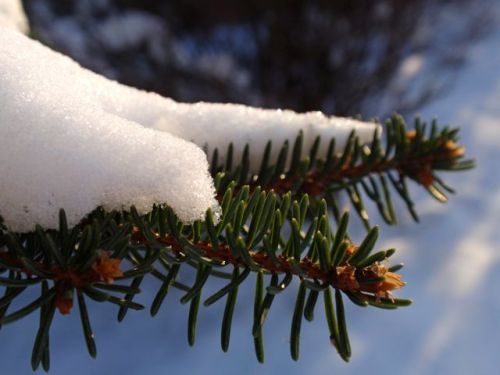 I had snow on my lap inside the house, too.

No, no roof emergency, nor open windows. 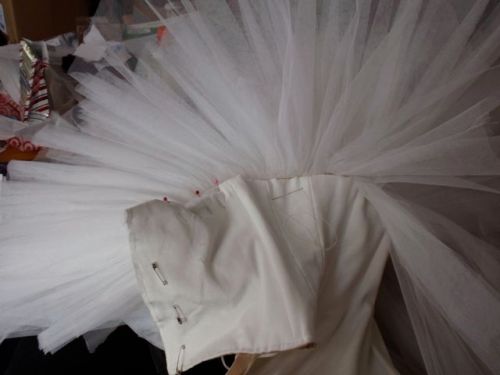 My older daughter, The RockStar, is in the corps de ballet in the Snow scene in the Nutcracker ballet this year.  (Yes, ’tis Nutcracker time again.  The performance is next weekend.) She volunteered me  — when I was not there — to sew her Snow tutu.  I needed to hem the bodice and sew it to the skirt, then fit the bodice to her and sew alternating hooks and eyes.  I haven’t really sewn since middle school, and my teenager doesn’t sew at all, more than sewing ribbons and elastics on her ballet shoes.

Mom?  I’m  sorry about that Madrigal singers dress with the train that I volunteered you to hem in high school.