And Thus Endeth Another Oktoberfest Week

Last Saturday, near the beginning of Oktoberfest here, the day of the big (BIG!) Maple Leaf Parade:

Cool and cloudy, as you can see, with a north wind.

Luckily, the threatened rain held off for the parade (both girl-children were accompanying friends actually in the parade, and multiple kids I know were in the marching bands), and the sun broke through later.

I was working (so had a good excuse for not going to one of the (seemingly) world’s longest parades with the highest proportion of drunk spectators at 10 am….)  The RockStar’s boyfriend (yes, I’m afraid it’s all too true) told us that they put grilles in the bells of the tubas for parades because people throw things in them; but the school doesn’t have enough money for each tuba to have a grille, so they put them just in the outside tubas (hoping for bad aim or people taking the easy shots, I guess).  Isn’t that sad?

Really busy week at work, and what with extra kid stuff going on (as in the Gothlet taking extra tap lessons from Ted Levy (YouTube link, because what else, for tap?) who is in town, working with the artistic director of  our dance studio), RockStar volleyball 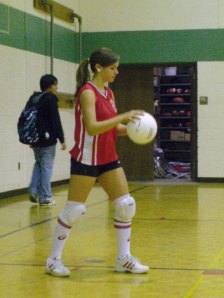 , my father’s birthday, the usual dance/church/etc.,

I have not much as far as current events to show you.   And I have yet to catch up with some just-past events.  Soon!  Knitting is slowed down by my left thumb issues, but immobilization in a rigid brace seems to be helping the pain, so there is hope.

However, I guess this is as good a time as any to show you the garter stitch project I started and finished while in Chicago, though, so I can show you at least something in between Saturday Skies.  Here I am working on it:

This is the Victorian Shoulderette by Sivia Harding, a garter lace small shawl with shoulder shaping.  It’s an elegantly simple pattern: just enough nice detail, shaping in the right spots, and not too fussy. (And no purling, what’s more!) 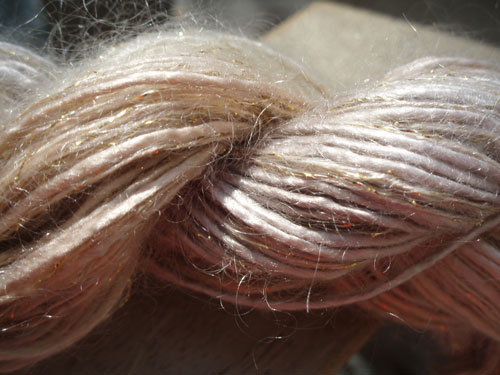 transforms it into simply elegant, I think!

Hey, here’s the Chicago Saturday Sky over the McCormick Place (convention center), which I was looking at while knitting at that table.

And the end result. 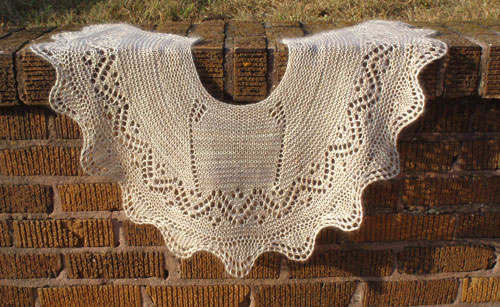 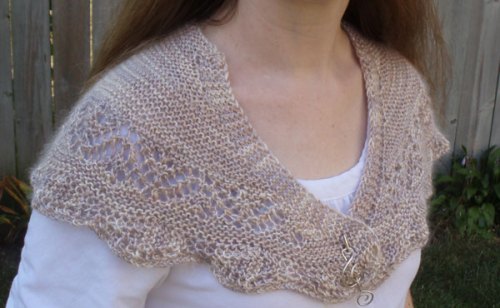 Things I learned from this project (and random other notes):

I achieved stitch gauge perfectly, but believe the yarn I used was rather heavier than the yarn called for.  The pattern row gauge was given after blocking, so I didn’t pay so much attention to it.

Usually, with lace, you use a disproportionately larger needle than the yarn calls for.  I liked the look before blocking fine; the eyelet holes were fairly open, etc.  BUT the drape wasn’t there, and the shoulder shaping, as you can perhaps (or not) see (well, compare it to the picture at the pattern link) had nothing to do with where my shoulders were — which was the fault of my row gauge.  So I blocked it out to achieve a lovely drape:  but now I don’t like the edging as well (it’s fine, but I really loved the original edging as it was) and the transition at the neckline got a bit funky.  Fortunately, blocking lace is not a permanent commitment!  I can easily reblock and will (when I get around to it….), by pinning out at the transition between the body of the shawl and the edging rather than at the very edge, then just coaxing the edging into shape so it looks more like it originally did.  Next time:  I hope I would pay more attention to the fabric drape that I wanted, and size up the needle even if the project ended up slightly bigger (since it’s a small shawl in any case).  The project shouldn’t have needed heavy blocking, being garter lace.

Also due to the (over)blocking: now that I have it on and see how it fits, I would smooth out the transition from front edging to neck rather than pinning it out.

The pattern had several small typos and one “huh?” which I put up on my Ravelry page when I uploaded the project.  (The “huh?”, at least for me, was that the main lace pattern was charted in the common way, with right side rows being read right to left in the direction you knit them [and the chart looks like the knitting looks]; but the edging pattern was written with the right side rows reading left to right, opposite the direction of knitting, and opposite the first chart, so rather mind-bending, though being mildly dyslexic has its advantages…)

Within a day, the designer herself had commented and by two days later, corrections were up on her website.  (I had meant to email her before I blogged it, anyway, but assumed these were known, since I had bought the pattern in April of this year at a yarn shop, so I hardly was the first to knit it.  But I wanted to put the typos/chart direction change up in case others were confused by the same things, since there was no mention of them on the other 41 completed Ravelry projects.  Obviously others are as capable of figuring things out as I am, but newer knitters may not be.  [It would never have occurred to me as a new knitter, especially pre-internet as I was then, that a pattern could be in error.  I would always have assumed it was me….]  Of course, if those 41 prior knitters hadn’t used charts, that would explain the lack of mention of typos….

Anyway, just another example of the power of Rav.  And a note in case someone who reads this has an older copy of the pattern and hasn’t checked for errata (and reads charts, which of course is the ideal way to go for lace, pardon my preaching!).

What else did I learn?  This yarn was a bit tricky, being two yarns (a silk single ply and a strand of glitter) that were not plied together, just wound up together.  But Addi Lace needles worked pretty well to manage it.  It was less resilient than a wool blend would have been (may have contributed to row gauge issues and drape, also).   I do want to knit this pattern again.  I think I will use a nice wool blend for a look more like the pattern, while cherishing my elegant shoulder shawl, which I have christened “Pearls on my Shoulders”, because this yarn in this colorway reminds me of pearl colors:  luminous cream, pinks, pale greys.  On a fine gold chain, apparently!

I also learned that it is very hard to take a (good) picture of a shoulder shawl oneself. 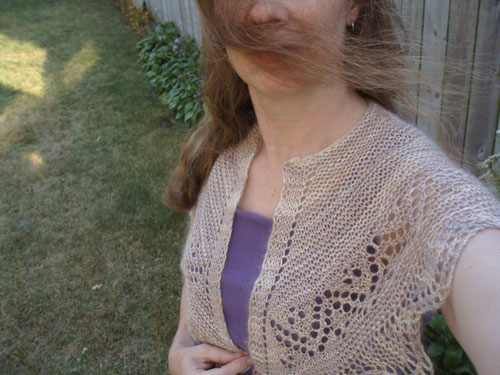 Going on to other things….!

Last weekend, I received some wonderful things in the mail from knitter-blogger-talented people.  I can’t wait to share (that is, show and tell!).  But I have not managed to get a picture of my spoils during daylight hours.  (I could have today, but forgot.)  So that was an awesome start to my busy week, but I will reveal all when I can show you.

This weekend was busy again.  More work yesterday, and the official last day of Oktoberfest.  My long-suffering husband took the girls down to the festgrounds to the rides (I don’t care for rides, or huge crowds of drunk people, though I do like the brats; this year, though, is the first time I just haven’t made it to Oktoberfest).  When I went to work yesterday, it was foggy and very chilly, just above freezing:

Here’s before and after work pictures of a skyway at work, with Oktoberfest sign.

A garage sale also happened yesterday, which my parents graciously hosted, with my aunt’s assistance; but I brought over outgrown kid clothes/cold weather stuff (which they sold for me, thanks, you guys!) and then Ihelped out for a bit after work, plus with the ever-important clean-up.  This post is getting long, so I’ll wait till another time to show you something knit-related my aunt brought to show us.

Then today was spent ministering to a sick RockStar (just an icky cold virus — no singing for her, though), singing & rehearsing at church, ferrying a busy Gothlet, going to the local orchard stand and getting apples for apple crisp (we’re trying Lura Red, they tasted good at the stand), plus the Gothlet picked out a pumpkin she can barely lift.  And a bit of slow knitting-with-hand-brace.

Whoof.  Busy week.  And this next two weeks, my colleague at work is gone, so I’m basically solo.  So I’m not thinking it’s going to quiet down….till Rhinebeck!

You will hear from me now and again, promise, but scattershot.  Besides, the relatively glacial pace of knitting progress to show you, and one stealth project I can’t show you, hinders my knit-blogging.  Though I can always show you pretty pictures from the last few weeks!  Like this:

This entry was posted in Knitting, Saturday Sky and tagged lace, Oktoberfest. Bookmark the permalink.

7 responses to “And Thus Endeth Another Oktoberfest Week”