A little more from the dyepot

Here are the other two things I dyed this weekend: 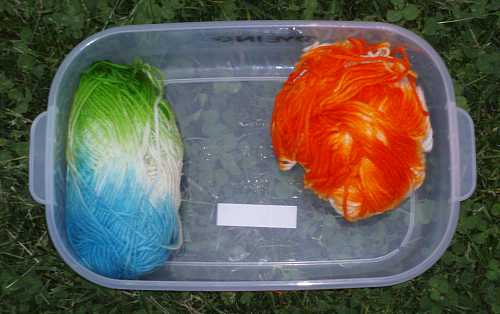 (here’s the other side of the orange ball)

These were obviously dyed with Kool-Aid, but dyed with a different technique, deliberately dyed in a ball form. This leads to more dye on the outside of the ball, less on the inside, which will give, particularly for the green and blue yarn, an irregularly graduated effect which I used for my Confetti Socks. 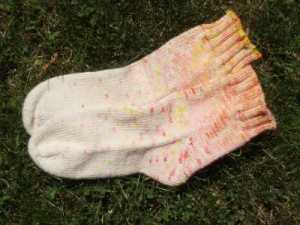 It’s very hard to duplicate (notice the Confetti socks are not an exact match); these skeins will probably become hats; and who knows how the half orange/half speckled orange will look knit up? But they’re both superwash wool and should make FINE hats, and colorful ones at that! Yarn does take forever to dry in ball form; in my blue-black car aka thermal mass, it can dry a bit faster.

Since the Gothlet created the yarn, she’s in charge of a more creative name for these mitts, but has not yet come through. One’s done (except for weaving in ends, naturally) and the second one is half done (sport weight knit rather loosely goes way quick). If I had bought this yarn, I’m not sure what I’d think about it, but since my daughter made it for a favorite teacher, I personally think it’s very cool!