Yes, I’ve been razzle-dazzled. It’s been another show choir weekend! As have been most weekends. With the RockStar’s show choir (that is, the parent organization; that is, including me) putting on a show choir invitational smack in the middle of February. Which would be the reason posting was scarce in February….

So much progress, and she’s had a good time.  Even though 8th grade girls tend to tower over their partners, in their heels… (well, that’ll change, soon enough). 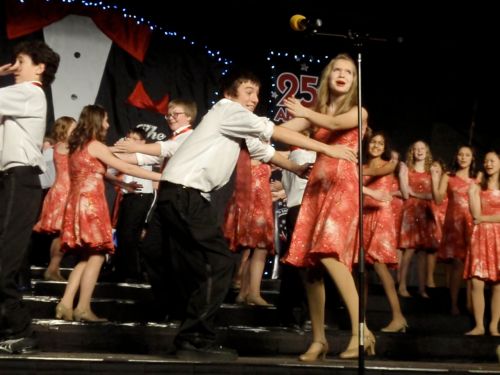 She’s supposed to be looking pained in this sequence, by the way.  They’re being ‘awkward’ in ‘Crazy Little Thing Called Love’.

Not awkward in the ballad (not that she usually is awkward, anyway.  My brand new teenager):

However, middle school show choir is for fun and for practice for high school (at least here) and the time involvement is like most other after-school activities.

It’s high school show choir that takes up all the time, however, as this is a competitive and intensive endeavour which is treated as a two-season sport.  The rehearsals, workshops, performances and travel to such take up a LOT of the kids’ time, and a reasonably good chunk of time for the parents, too!

So, yesterday, this sunset is almost all I saw of the Saturday Sky, for example:

Given work in the morning, show choir in the afternoon, back home briefly, and back to show choir finals in the evening! Then waiting till the awards ceremony (the RockStar’s school didn’t win, but they’ve made finals in every competition, so a very solid season).

I guess I never did show you the RockStar in all her show choir glory, as I’ve been too busy living it.

You saw “City Lights”: here’s another photo from that piece.

Then the tearaway dress is torn away…and it’s “Havana”.

Followed closely by a dance solo for her in “Never Dance”.

The costumes are pretty striking, all together.  The final pose: 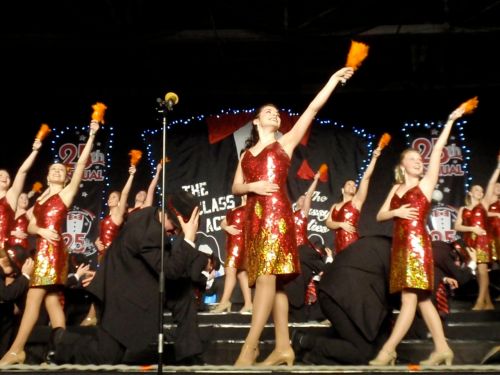 The ballad slows it down.  A Disney medley of “Part of Your World” and “A Whole New World”. 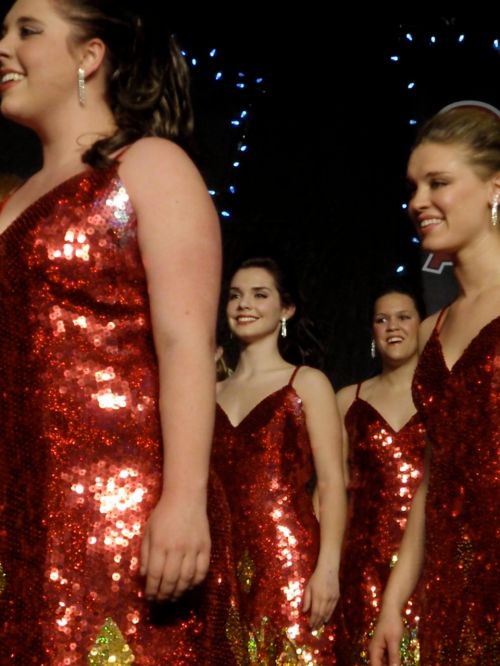 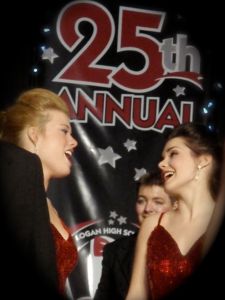 Then the boys do a version with added humor of the Beach Boys’ “California Girls”, followed by the girls doing Katy Perry’s “California Gurls”.

Time for a beach party!  The boys join the girls for a medley of “Beach Blanket Bingo”, “Surfin’ Safari”, and “Surfin’ USA”.  The RockStar returns to front and center.

RockStar isn’t in the front for that one, so no good pictures of her: here’s the best. 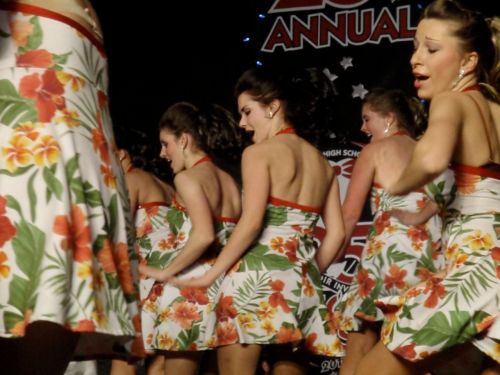 Here are several of her good friends, though, burning down the house. 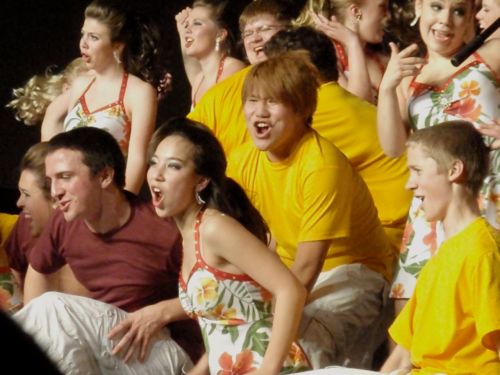 Isn’t it exhausting just looking at the pictures?  (But aren’t the kids great?  You should see them in person!)

We’re all tired, though.  And the RockStar took one for the team yesterday, with a jaw injury incurred when her partner did a quick turn at the wrong time, and his shoulder hit the angle of her jaw.  She couldn’t quite close her mouth all the way for the rest of the show…luckily, choir involves opening your mouth wide rather than clenching your teeth, and ice, rest, ibuprofen and time have taken care of the swelling, so all is working again.

Sprained ankles (which we’ve had), I expect in dance, but I admit that I didn’t anticipate having to ice my dancer’s face last night!  Ah, well, we watched part of “Fiddler on the Roof” while she iced.  And things are much better this morning.

All this spectating time has led to some knitting progress, though the mittens are not conducive to knitting during other activities nor to knitting in the dark.  So they are showing slow (though definite) progress.  My goal is to have them done before the calendar says it’s spring.

This blog post is quite long enough, though, so knitting progress will have to await another post!  Hopefully all the razzle dazzle will make you completely forget about the fact that this is a knitting blog which has only had one knitting-related post in over a month.  To aid in forgetting:  More razzle dazzle!

This entry was posted in Family, Show Choir. Bookmark the permalink.