Warning to the phobic: lots of (pretty) snake pictures!

The post title refers to our gentle corn snake Trinity…who shed her old skin on New Year’s Eve night, apparently, as this is what I found New Year’s Day morning.

What a great metaphor, though, hmm? I am not one for New Year’s resolutions, but just as the old year is shed, and Trinity sheds her old skin so she can grow, we are constantly growing and reinventing ourselves and shedding our old skins.

When we do so, we are even more vibrant, and our beautiful selves shine through.

Fear not, I am not planning any monumental life changes, nor am I becoming enigmatically philosophical.  (Well, any more than usual.)

But as my daughters grow and turn into young women, I realize that growing up (and perhaps, growing old) is becoming more yourself.  Learning to discard all the societal messages and the peer pressure and the irrelevancies that cloud our view.

(Did you know that a few days before shedding, a snake’s eyes turn bluish, as the layer over them starts to separate?  Snakes can be a little skittish then, because they can’t see well. I know that if I am not seeing clearly, I get more anxious, and cranky.  Which makes it harder to see clearly…)

Speaking of daughters, today I gave the final incarnation of the Rock Star’s Christmas present.  She had asked for a Chevron Scarf (Ravelry link) made from two skeins of Socks That Rock mediumweight yarn, which I had bought at Sock Camp.  I made it to a length that I thought was almost long enough, then wrapped it and gave it to her on the needles, so she could tell me how long she wanted it.  (This kid, if it’s not fairly perfect, it won’t get worn.)

She said, “Oh, about twice that long!”

Eep!  It’s not very thick yarn!  Even regular scarves take a while, and this is made from sock yarn.

But by dint of steady knitting since, and freed of the need to knit in secret (yes, she’d asked for it, but she asks for a lot of things, and had forgotten about this), I finished New Year’s Eve before midnight, and blocked it during the Rose Bowl. 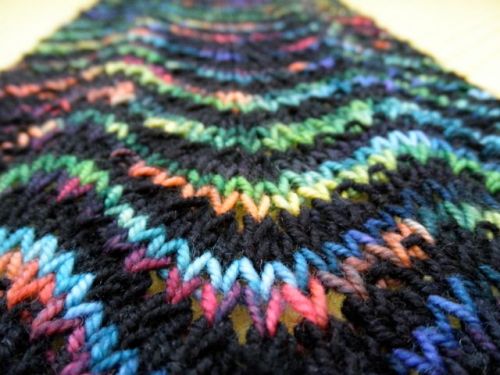 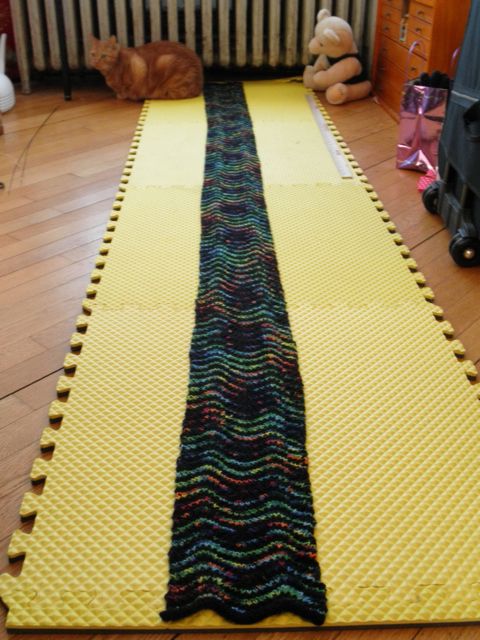 Now, only a bit more owed on another slightly late Christmas present (I needed this one tried on as well; and I hardly did any Christmas knitting this year), and then I can finish up a couple  UFOs and start a new project or two (or three….).

I suppose I am constantly reinventing my knitting self too, with every project.

When I fed Trinity today (corn snakes eat mice, mostly, if you’re wondering; we get frozen ones from the pet store), I noticed that the very tip of her tail hadn’t shed.  In our climate and in this extremely dry time of the year, it’s not uncommon to have a bad shed.  (Corn snakes are native to the southeastern United States where it never gets as dry as it does here, now that the outside air can be 0 F.) If not treated, this unshed skin could eventually amputate the tail tip.

So, with water and a glycerin shedding aid solution, I helped her get the tail tip shed too. 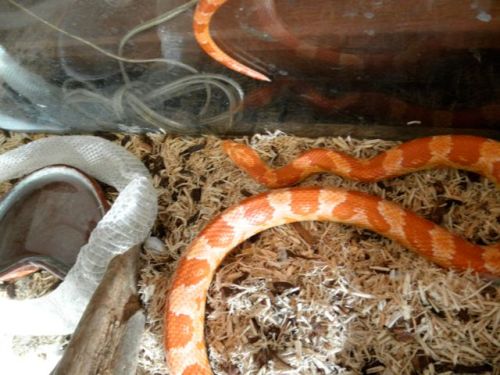 Sometimes we all need a little help to reinvent ourselves, too.