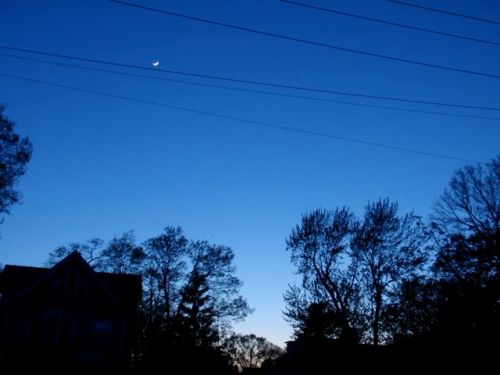 just didn’t have the same grandeur as the sunset over Ludlow Bay, somehow. 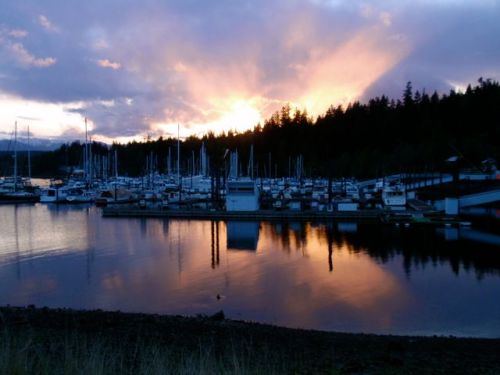 (Though it was good to be home.  Well, except I missed my breakfast buffet, and wonderful coffee, and decadent desserts, and non-stop fun, and most of all MY KNITTING CAMPER PEEPS!)

Speaking of:  A few of the faces of Sock Camp! 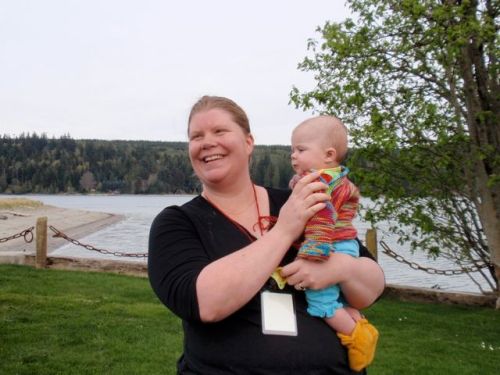 My friend Cece and her baby Maggie. 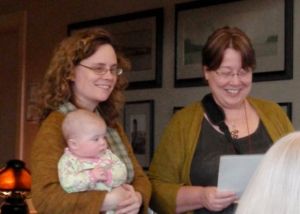 With Steph and Tina, as they laid down the law welcomed us on the first evening; 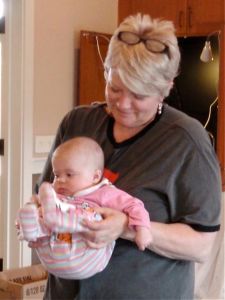 Dancing to the Glee soundtrack with Sockateer – Counselor Cockeyed, who is practicing her grandma moves in preparation for an exciting event (by the way, Maggie is definitely a music baby; when the Glee CD stopped temporarily, she told us about it loud and clear!); 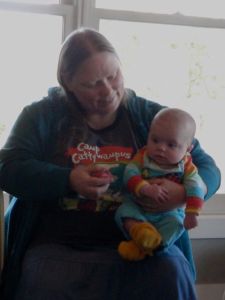 Helping Janel teach class as we knit on our little sockies: 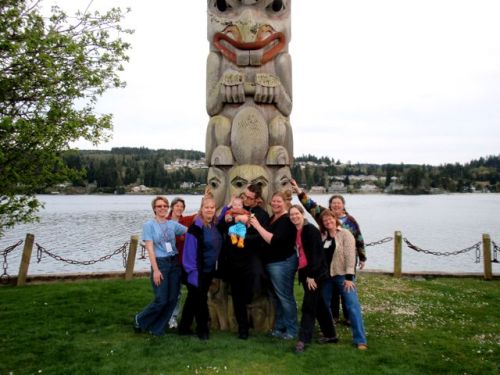 Group shot!  Foxes with Josh (from the Inn), the Totem Pole

, and our little Maggie Fox Cub! 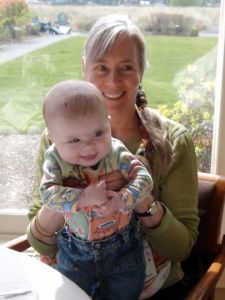 And with another camper friend.

Though she was also plenty cute all by herself.

(Click for even bigger cuteness if you can stand it.)

She wasn’t even the only baby at Sock Camp: we had two other well-behaved babies there. 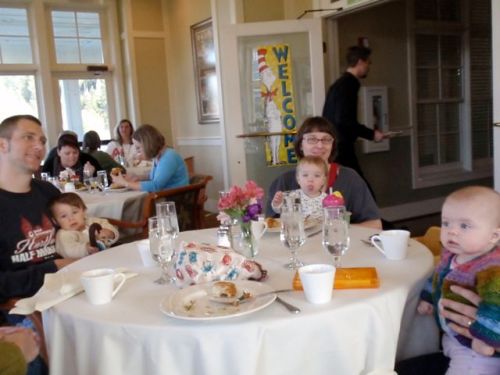 No toddlers or other kids in class (this is not quite kid camp) but the babies had fun, and were fun!

The awesomely cute solo pics above were from our dyeing class with Tina on the last day (classes were taken with your tribe, and were in the morning). 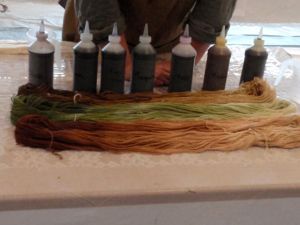 We were asked to bring yarn that we didn’t care for the color of, to overdye, though not everyone had such (“Why would I buy something I didn’t like?”)

Me, I did have a couple skeins to overdye. One was a purchase with a specific sock design (in my head) in mind, and when I saw it in person, it wasn’t right; and I have come to the realization after a couple years that I just will never knit with this yarn as is.  It was something about the brightness of its magenta coupled with the paleness of the mint green.  I don’t know.  I didn’t get a ‘before’, but this is an ‘after’: 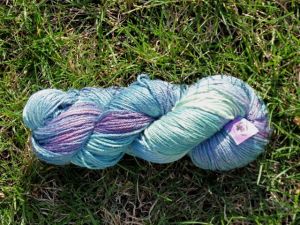 I placed blue on the magenta and somewhat on the minty green, and I like it better.  This was a merino/bamboo/nylon blend, so took the dye interestingly.  (It looked a lot darker when it was wet!)

Also, I had a skein from one of my favorite dyers that had not turned out quite as expected, back when she had been forced to change dyes abruptly, as the dyes she had used for years for all her colorways were suddenly discontinued.  This was the first attempt at this particular colorway with the new dyes, and didn’t come out quite as it was supposed to. 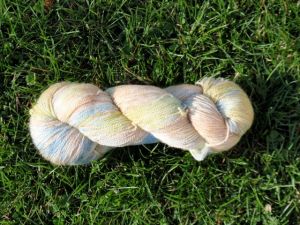 In reality, the skein has more chunks of brown and tan than this early morning picture makes it look like.  Once again (probably partly because I *know* what it’s supposed to look like), I wasn’t sold on this, or on how it would look knitted up (though that’s a bit of a crap shoot).

So I tried overdyeing it partially with blues and blue-greens.  With this result: 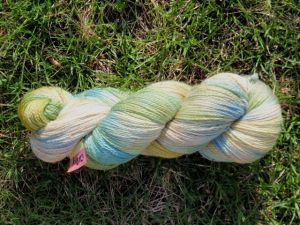 (Heh, in this picture, it doesn’t look TOO Much different.  It really does in person.)  I stopped short of what I could have done, as I wanted to preserve some of the original colors also;  one can always overdye!  But I have a second skein, and I might overdye that totally, kettle-dyeing it blue or blue-green.  The difference will be interesting.

Before getting to do those, Tina showed us how to do a color value study (using a couple different techniques).  Examples are in the picture above.  Although not usually my favoritest color, I was in the mood for a spring green, and that was what I dyed for my gradient yarn.  I was pleased with how it turned out….until someone else’s yarn leaked onto it (which tells me both she and I could have wrapped our yarn better). 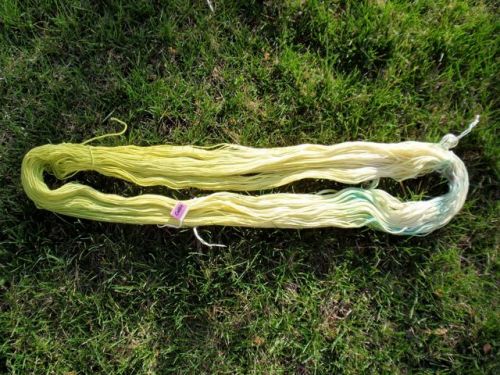 See the blue-green-purple bits?  Not original.  Oh, well.  After I got over my grumpy, I realized it should knit up in a very interesting way, and I have the technology to do another gradient-type skein if I wish!

And last, we just got to play with color on a blank skein (the above and this skein were both STR medium weight).  I just changed colors somewhat randomly, but thinking about what would blend well with what:  magenta through reds to rusty browns to blue-greens is what I ended up putting on the skein. (And then I forgot the vinegar, so it was a wee bit lighter, I think.) 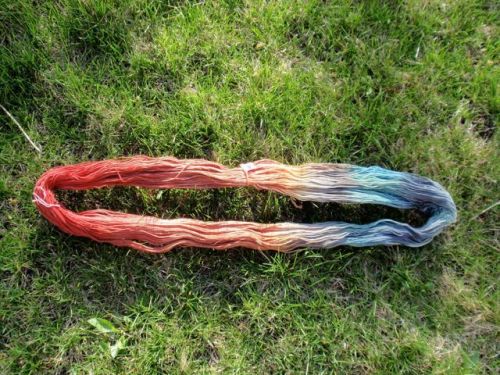 It’s a little reminiscent of the sunset over Ludlow Bay, actually!  I suspect I like this one better in the skein than I may like it knit up, opposite of the gradient skein…

So, last year was Tina’s first dyeing class ever.  And my group was her first class of that first class!  I don’t think I ever showed you the yarn I dyed last year (it was very busy when I got back from camp).

Last year, we dyed three skeins, and the first was an assignment from Tina: which had something to do with getting us out of our comfort zone.  We first talked about our favorite colors and why they were, and then had to speak about colors that were NOT our favorite.

My favorite colors are jewel tones, with deep greens, blues, blue-greens, and wine being my absolute favorites.  My least favorite colors are probably yellow and orange: though I used to dislike them, and now not so much.  Knitting and dyeing has made me love color more for its own sake.

So: my assignment from Tina was to put my not-so-happy-place color (yellow) in with my happy place colors.

And this yarn was the result:

(heh, I was hiding the yellow a bit in that picture.  Still wasn’t convinced, I guess!)

I just finished knitting socks made from that very yarn.  Which I cast on, on the night of the December blue moon (the Blue Moon Cast-On!)  In fact, I cast those socks off and wove in the ends in the Yarn Harlot’s sock class at Sock Camp.  It seemed so appropriate somehow! 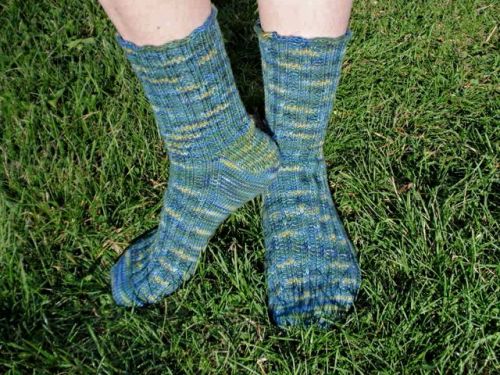 And now I am very happy with them, not least with the yellow bits, which make all the lovely blues and greens ‘pop’. 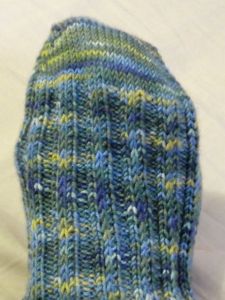 It reminds me of irises, or yellow waterlilies on a lake.

My own design, a simple toe-up sock with gusset & flap heel à la Widdershins, and a slip stitch rib to break up the variegation while still resulting in loads of stretchiness.

Works for me!  And now I have Sock Camp on my feet!

(I’m knitting up the second skein I dyed last year now too….I’ll show you that sometime later.  But this post is quite long enough.  More to come about camp, however!)