Busy weekend…work, and then the Gothlet had her First Communion. 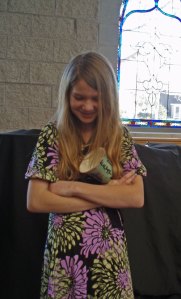 And Beya the kitten-cat seems to be a little older than we thought, just small for her age.  Why do I say this?   Well, we were going to take her in soon to be spayed.  Now, it will be sooner.  She went into heat this weekend. 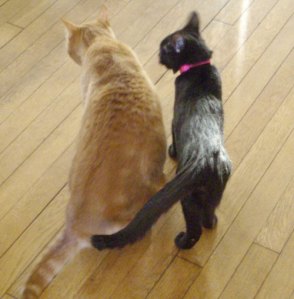 Mrraawwwwrrrr.  Mrraaaawwwwwwwrrrr.  Again and again and again.  (Citrus doesn’t care in any meaningful way.)  Sigh.  She now has a preop appt in 2 days, and a date with destiny next Monday.

Maybe her frustrations are why I found this the other day:

Those are imported handmade porcelain Fu Dogs that I bought from an art gallery.  The kitten is SO lucky the female Fu Dog fell in such a way as to get lodged and not break.  I see now she’s also messed up the speaker wire and is in danger of pulling the lamp down.  Sigh.

Well, a couple other things to tell you about (other than Madrona!).

One is, this wonderful swap package that I got from Carrie early last week: 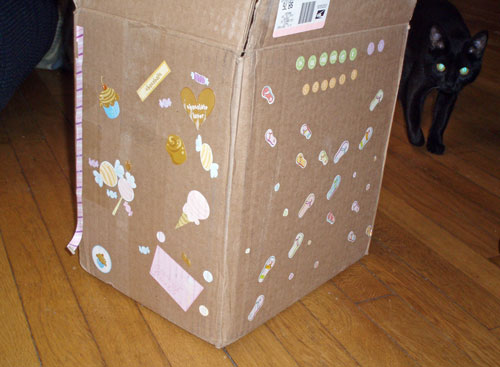 (Beya of course had to check it out too.  She apparently knew there was something for her in there also!  See the blue tin just below?  “Fish Out Of Water” fishy treats!)

This was a part of the Knitters’ Coffee Swap Four.  Oh, the nummy things.

Raspberry and Orange Creme Sticks (mmm, perfect with dark roast coffee); Nikki’s English Toffee Chocolate Confection (English Toffee is one of my all-time favorite flavors); cute little Reese’s Whipps (Reese’s being the other all-time favorite flavor!! How did Carrie know?!); a Daelman’s jumbo caramel wafer, yum; and Lady Walton’s Creamy Dark Chocolate-Filled Wafer Cookies. And the coffee to drink it with: Italian Roast, WorldMarket House Blend (I don’t have a World Market close, but my sister-in-law loves the one near her), and oh, boy, Vanilla Macadamia Nut Kona!!

Then the non-edible treats: a Creative Knitting I don’t have, a little cookbook with ideas for dried fruits, fun stickers, cool reproductions of vintage cigar box labels (the top one says, simply, Hand Made!), and these gorgeous stitch markers:

The perfect accent for THIS lovely, elegant, soft yarn:

This last Saturday’s Sky was rather prettier.

Though it would be so much prettier if it didn’t have the grrrrrr power line that cuts right across the back yard.  And there are similar lines going across our view in the front.   Grrrrrr!

I played around briefly and Photoshopped out the most obtrusive part of the power line.  Ah, that’s better.

In between, however, we had some obnoxious weather, which I realize much of the south and east have just experienced their own version of (so I’m not looking for any sympathy, just sharing pictures).  We were right on the edge of the temperature shift, so it started out as a couple hours of rain; then turned into slush falling from the sky, then little balls of ice.

Then to heavy snow, a white-out for about an hour.   But then it stopped. 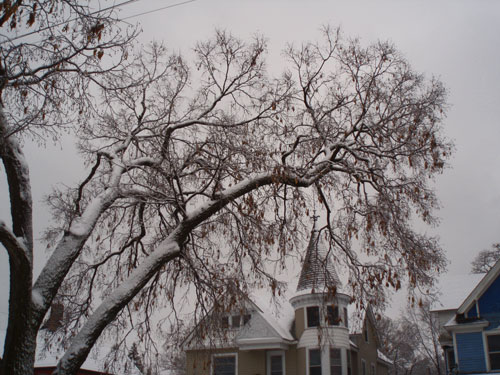 At which point, all the rain had frozen hard under the snow, of course.  But it was mostly slushy, so not glare ice (hard on the walking, though).

Still cold, but they’re promising a warm-up soon.  The wind chills have been subzero F every morning, so I’ll believe it when I feel it.

I have been knitting!  I finished a stealth project.  If you are in my family and your birthday is this spring, don’t follow this Ravelry link.

Having finished that, I cast on for Cookie A’s Thelonious Socks (it’s a KAL for The Loopy Ewe Spring Flingers) with this wonderful yarn. 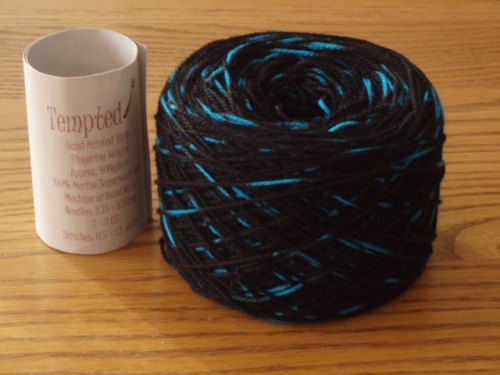 The yarn is on the busy side for the pattern, true, but I decided in my head the little flecks of color would be like jazz notes punctuating the sock.  (I chose the yarn because the dyer is also going to be at the Fling, and the yarn was in my stash.)  I cast on yesterday; looks like not much so far, despite the fact that I’ve knit a fair amount.  But you can’t really see the pattern yet.

A little easier mentally is the other project I just started, Gauntlets for the Gothlet out of Gothsocks yarn.

Loving this yarn in a big way.

I’ll tell you about how I’m designing this in a later post.  But wanted to show the dyer’s work.  Gorgeous.

Though one of these projects is a somewhat complicated chart project, and the other simple knitting, I realized last night that they’re both on size 0s (2 mm needles).  My hands are complaining after knitting through two movies; my girls wanted to watch “Hercules” for nostalgia’s sake, and then my husband wanted to watch “Local Hero”, I think ditto.  I usually don’t get that much sitting and knitting time; it was great, except my thumb and fingers are requesting a project on needles at least double the thickness….

Hmm, a BSJ (Baby Surprise Jacket) may be happening soon.  That would be a pleasant break in DK-weight yarn.  Or my sportweight yarn from Madrona may arrive that I’m planning to make a red shawl from!  But I think my fingers may secede from the union if I don’t placate them by switching up a bit.  (Or maybe the oh-so-warm tropical 40 degree F weather they’re promising later this week will help!  One can always hope!)