So I was speculating the other day why women seemed to be better predictors of their race times than men (based on a totally inadequate sample size and highly questionable logic).

In that same vein, here is an observation and a question.

It struck me, watching the high school show choir Sunday night (not the RockStar’s choir), what a significant percentage of blondes (and blonds) there were.  (Granted, in the picture below, the girl in the foreground looks highlighted, a bit, but three of the other five girls in the picture appeared to be totally natural blondes in real life.) 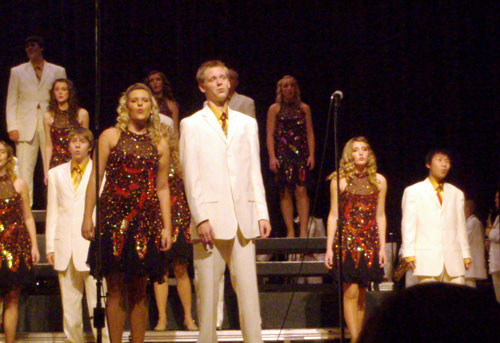 Now, yes, there may have been selection bias for the choir.  But I think most of it is genetics.  Lots of Germans around here, some Norwegians (though many are dark, actually), a few Swedes and Danes.  Of the girls in the choir, there were two redheads, and about 1/3 blonde blondes, about 1/3 dishwater blondes/light brown like me, and about 1/3 brown/black.

Why do I bring this up?

I was at an educational conference in Florida a few years ago.  I was knitting, at the back so as not to distract anyone.  I looked forward at the group of attendees and realized that, although there were a number of blonde heads in the group, not a single one was a natural blonde.  Not one!  It was so strikingly different from the Midwest.

And it led me to ponder — what is so special about blondes?  I considered myself blonde when I was young, though my hair has darkened so I don’t any more (my husband, bless his heart, still thinks of me that way) — being blonde-ish didn’t seem like anything special.  (Leastways, not around HERE.)  Why do black and brown-haired women go blonde?  Sometimes, it doesn’t strike me as flattering, with certain skin tones.  Nor does the black line at the part of the hair.  (My husband, who is generally fairly observant, used to ask me wonderingly how I could tell, if I said something about a woman dyeing her hair.  Another difference between men and women….)

Theories?  Do we want to believe that blondes have more fun?  What is it about blonde hair?

While you’re pondering: tomorrow, a contest announcement, and the day after, the unveiling of the Coulee Shawl (and its free pattern).  Plus:  The Noro Striped Scarf is indeed addictive.  I think it ought to be a controlled substance.

This entry was posted in NaBloPoMo, Philosophical musings. Bookmark the permalink.

8 responses to “Some Sociological Musings”