But this week, a light but sizeable box was on our porch.

Now, a few of you have heard my personal thoughts about taking up spinning — for me personally, that is.

So just WHY is wool top arriving on my doorstep?  (I assure you, none of the above have changed.)

Every 4 years, our church puts on a production, a recreation of Bethlehem 2000 years ago, called The Bethlehem Event.  (Do follow the link, it tells all about it.  Plus, see the pictures on the left side of the page, from the 2004 event?  The potter on the top right is a very good friend of mine, and a fellow knitter!  And the ‘woman at the well’ whose picture is on the bottom right is also a friend and a knitter.  No, that’s just a description of her location in the village, not reflective of her occupation, even if her hair is showing, rowdy lady that she is.) (And she is!  Rowdy.)

Last time, I and my family were papermakers (we made papyrus, pretty fun).

This year, we are a shepherd family.  (As Kmkat, who has met him, might guess: my husband is having nothing to do with this.  His excuse is that the church band has to play the whole time, for people as they’re waiting.  Hmph.  Fine.  I’m a widow.  [Actually, I was going to claim that my husband was in town trying to sell our sheep, or out with the rest of the flock or something, but apparently they’re scrounging up a husband for me now.])  I and my daughters will have real live sheep and be just outside the entrance to the ‘village’ as people enter; we greet people: “Shalom!  Be well!  Have you come far?”  and talk about the big light in the sky that we heard about last night….

Now, the event lasts 5 hours on paper, but anyone who’s waiting at 5 pm gets to go through, so it’s really 6 hours.  First of all (most importantly to me), if I had to sit with nothing in my hands for 6 hours, I would go off my rocker.  Or off my bale of straw, more accurately.  I can’t knit — it’s not ‘period’.  I’m not officially a weaver (they’re in the village).  But a woman in a family who kept sheep — would drop spin any time she was not cooking or doing something else.  She made homespun for all her family with the wool from their sheep, with a drop spindle.    (The children learned when they were five or so, probably, to spin.)  (I’ve been doing a crash course in Judean shepherd life; can you tell?)  It would be completely OUT of character to sit there with nothing in my hands for all that time.

Therefore — I am abruptly and wholeheartedly abandoning my resistance and learning to spin!  I spun once on a wheel this summer, and showed you then the results of that hour-long introduction to a Louet wheel.

Not that I felt I had gotten the hang of drafting (for non-spinners — the mostly one-handed process of thinning and spreading out the fibers, so that the twist can gather them up smoothly and continuously) or of coordinating my hands yet.  But I had been introduced to the principles.

So: intense research followed as well as a plaintive call for help from my friends on Ravelry who actually know about this stuff.

I now have a lot of book-learning, and am trying to acquire practical skills!

Judean spinners would have used what’s called a bottom-whorl spindle, which is the less common type available in this country.  Many spindles come with a hook at the top: I don’t think they made cup-hooks in small Judean villages of 2000 years ago, so if I get a spindle with a hook, that will have to go.  Instead, the authentic technique would be to secure the yarn with a half hitch before spinning; then slip it off when a length of yarn had been spun, wind the yarn around the spindle, resecure.  That’s the technique I’ll need to master for now.  (If you’re interested, here’s a video showing the whole process of drop-spinning on a bottom-whorl spindle by Abby Franquemont, a veritable spinning expert.  It’s only 7 minutes from start to finish, but it does show all this stuff I’m talking about.)

So I have been trying to reasonably expeditiously acquire a bottom-whorl spindle or two.  (I have until December 21st to get to look like I know what I’m doing.)  The first one happened to be an eBay purchase from a Wisconsin maker, so it arrived first.

However, it’s quite light, and I have trouble getting it to spin very long.  Add to that the fact that I was first trying to spin with hand-dyed commercial roving which I acquired as a door prize, which was somewhat felted (and I didn’t have the hang of drafting anyway).  (The pink stuff under the brown stuff.)  It was not much of a success.   I needed hands-on help!

The shop-owner who had demonstrated for me how to spin on a wheel, Kathryn of Ewetopia Fiber Shop, coincidentally enough was having an Open House the night before the opening weekend of deer-hunting (for hunting widows & others).  I asked her via Ravelry if she knew how, or knew of anyone who did know how, to drop spin.  I was happy to pay for a lesson.  She told me she could spin with a spindle, though it was not her expertise, and she’d be happy to help if she could.  (No charge.  Very kind!)  Two nights ago, therefore, the Gothlet and I headed out to Viroqua (the Gothlet usually these days wants to stay home and watch TV, but was intrigued by the spinning process and wanted to watch so she could learn too).

Well, first Kathryn diagnosed feltiness as an issue with the roving I had, and thought I might find another fiber easier to draft to begin with.  I tried spinning from a cloud of some Border Leicester wool from her own sheep, and it went much better (that’s the brown fluff above).  But I still couldn’t get much of a spin going on the spindle.  Kathryn mentioned that a local crafter made spindles and she had them in her shop; they were mostly high-whorl spindles, but on investigation, three were bottom-whorl, and the one that wasn’t rosemaled looked promising — it certainly looked pure and simple, more authentic than what I had.   And heavier.

So I tried it, and it spun beautifully.  Different spindle, different wool prep . . . success!  Not that I don’t have a lot of practicing to do.  A LOT.  But I am starting to get it. 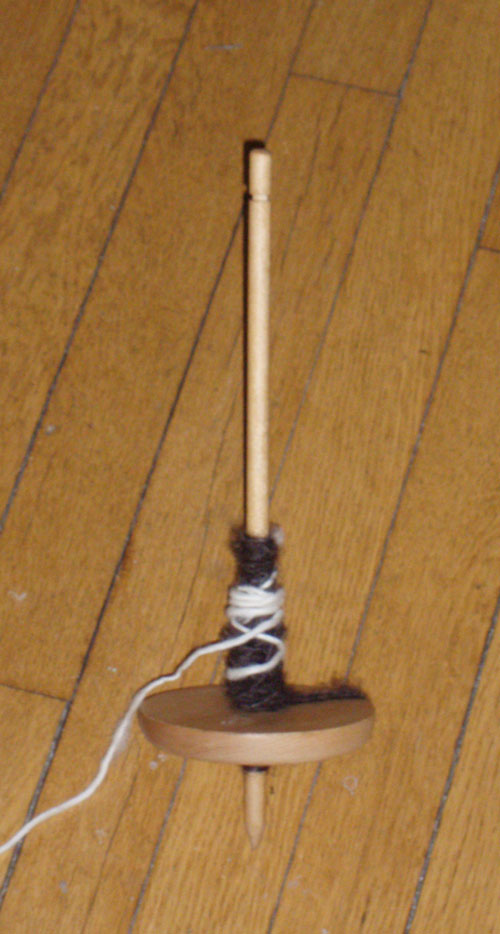 Here is my new spindle.  (Notice no hook — I learned to half hitch!)  The brown underneath is the Border Leicester; the white is Rambouillet, the white fluff in the box of the first picture.  Soft, oh, so soft.  The Gothlet didn’t believe it was wool when she touched it.  A little harder for me to spin, but not hard, not like the felty stuff, and makes a totally different kind of yarn.  Lovely.

Since Friday night, the Gothlet also has been stealing my spindles and spinning with them too.  (She put the brown stuff over the pink stuff on the first spindle; she didn’t like my ‘authentic’ spindle.)  She gets highly disgruntled when she gets slubs.  Me, I’m accepting my slubbiness etc.  My goal is to keep spinning, keep practicing, so my hands figure out drafting and coordinating, so the motions become smooth.  So I look like I know what I’m doing! I know my yarn will get better, and I’m not stressing about it, the way I was the first time I spun.  I am planning to try to spin daily from now until then.  Thus it looks as though in exactly four weeks, I will be sitting or standing with my (temporarily adopted) sheep and my daughters, and perhaps a random shepherd husband, as well a little extra wool — drop spinning and greeting visitors to a small Judean village. Yes, of course, there will be subsequent photographic evidence!  (Not that you’ll recognize me with no glasses and hair all hidden.)

Now, if you’ll excuse me, I have to finish writing this post and pop over to eBay.  I have some Corriedale coming….

This entry was posted in NaBloPoMo, spinning and tagged spindles. Bookmark the permalink.