Please Try To Contain Your Jealousy

Although I grant that you have every right to be jealous of these: 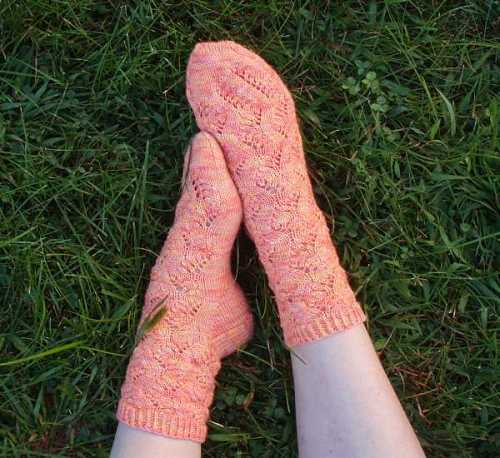 Spring Forward socks, from Damselfly Yarns‘ June Sock Club yarn, Seaside Sheep (Sea Cell/merino blend).  My only pair of socks completed for Summer of Socks ’08!  I started a second pair of socks this summer; I finished another pair, the Oktoberfest socks, but those were started long ago; I worked on a third pair,  started earlier this spring….but these are the only ones started and finished this summer, per the official rules.  They’re also a lace project, so are part of Summer of Lace as well.

And I love them very much.

Lovely yarn, great pattern, and they would have been done two weeks ago except for being put aside for the Ravelympics.  I got creative with the toe patterning, and also took a half repeat out of the leg, to make a shorter summer sock, but next time I knit this pattern, I’ll knit it as written, for a fall sock.

Here they are, flirting with the Saturday Sky. 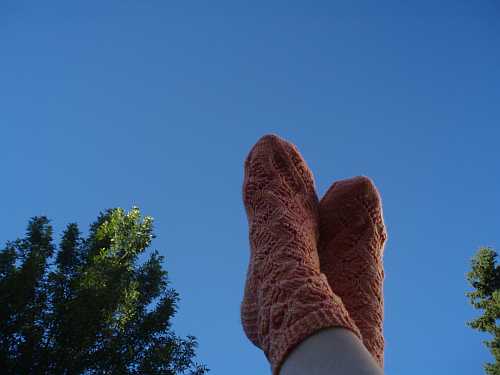 This was taken not long before leaving on a trip: the other reason that I’m sure you will be jealous of me.

Just imagine: driving six teens and preteens to America’s Largest Waterpark in Wisconsin Dells, for an overnight stay and not one but two days at the waterpark!  The Preteen is turning 13 this week (so I will need to come up with another name for her – one that does not inspire icky Google searches, also), and this was her birthday party and treat.  Since seats in the minivan were at a premium, and since a) I was of the appropriate gender given hotel rooms, and b) it was my idea, I was flying solo, parentally-speaking, this weekend.

Hence: Saturday Sky at the Waterpark, later that same day! 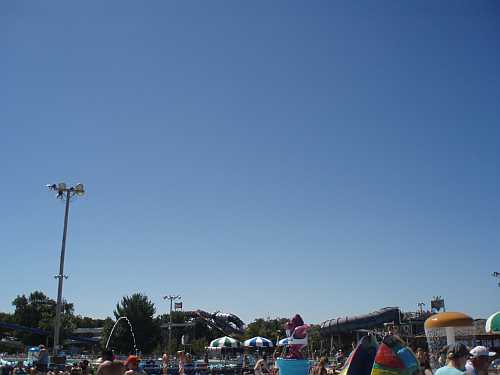 It was a hot one here in Wisconsin, both days 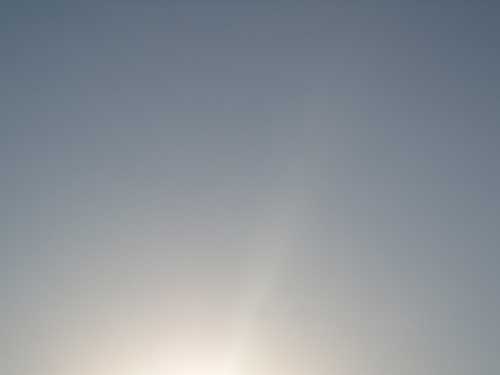 (and still today) — perfectly summer weather for the official last weekend of summer, and perfect if you’re waterpark aficionados like this crew. 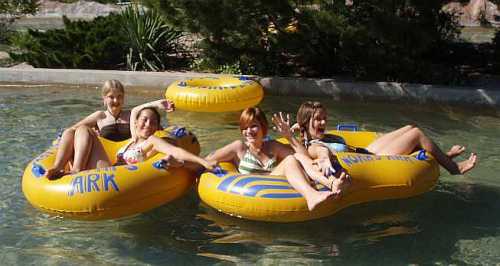 (The teens and soon-to-be-teen taking a break from the wild rides to float for a bit.  With the full representation of hair colors, don’t they look like they are starring in some teen flick?)

Me, with my Irish skin, dislike of scary rides and dislike of being cold: I found shade and stuck to it as much as humanly possible.  (Yes, of course I brought my knitting.)    The first day, I didn’t even go in the water except walking through the zero entry pool once to cool off.  The second day, I went in the Wave Pool briefly. 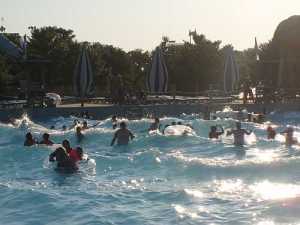 But mostly my job was to be Mom Central for any need that arose for two groups of roaming girls.  Helpful hint if you ever need to do this:  The shade is located by the little kid areas, understandably.  From my experience: the ballpit by the Big Kahuna becomes a pit of loud despair and angst by midafternoon.  The next day, I hung out by the kiddie bumper boats by The Wave, which mostly involve going in circles, and are much less traumatic.  Not to say, noisy.  Well, it’s all noisy, but repetitive total meltdowns after child A pushes child B, and then gets a ball on the noggin from child C, get under one’s skin sooner rather than later, at least for me.

I meant to knit on my Swan Lake shawl, but apparently the chart I needed got separated from the project in last week’s fast tidy-up.  So I had everything but the one page of directions I needed.  I thus worked on a stealth project (short-term stealth only) and a sock.

So, anyway, as I said, I know you wish you could have been there.  Sorry; there was no extra room in the minivan.  Maybe next time…

Home now, a little tired (something to do with being awakened at 4 am by gales of laughter from the adjoining room . . . quickly quelled) and looking forward to school starting tomorrow!  (That would be me — dunno about the girls.)