A Month of Saturdays — and Knitting for Ravelympics 2008!

Back from Family Camp, where an awesome time was had by all (but sorting out and severely paring down the almost 1000 pictures to show you just how awesome, will take longer than the current state of laundry, work, and spare-time Olympics-viewing is currently allowing me!).

But I wanted to show you a brief knitting update as far as the Ravelympics Challenge I took on! Then I’ll soon be showing you the results of the challenge when the Olympics is over.  Ravelympics (Ravelry link) is a knitting/crocheting challenge in conjunction with the 2008 Summer Olympics. I took this as an opportunity to do some ‘WIPS Wrestling” — wrestling some put-aside Works-In-Progress into submission; as well as also designing and knitting a small design project I’d been mulling over.

Cast-on was allowed to happen at the start of the Opening Ceremonies in Beijing. That was, however, 7 am CST that Friday, the first day of my vacation, and although I was awake, I was busy caffeinating and doing some final packing for Camp, so I cast on for my new project slightly later in the day, as well as gathering together everything I needed for my wips/UFOs to take to camp with me.

Here are the projects the following day, at Camp, by the lake:

First: WIP Wrestling #1, last year’s Mystery Stole 3, Swan Lake, just where I left it off, about 40% done (I kept waffling about the length and whether to knit the wing, put it down for holiday present knitting, and never picked it up again). Here’s a better picture of it from last summer pinned out so you can see the pattern. 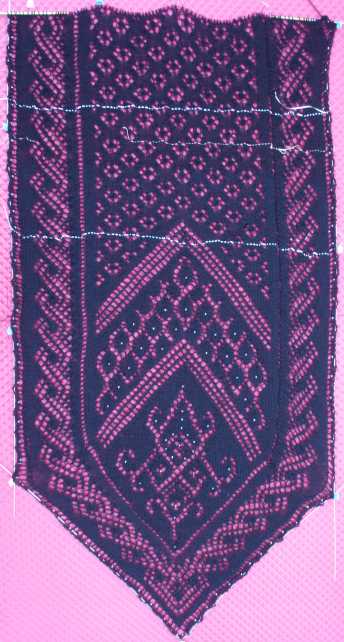 This is too pretty to allow to languish.  It mostly did so because it was for me (thus it goes to the back of the queue), and because of the aforementioned waffling and holiday knitting. (Actually, it was first displaced by my Wedding Pi shawl; I started Mystery Stole 3 as my first big lace project in order to have knit a lace shawl before I designed and knit the Wedding Pi shawl for my friend’s November wedding.  And then I didn’t finish MS3!  Slacker!  Well, I knit enough that I felt comfortable with the process, okay?  And I didn’t NEED to finish this, whereas I obviously had to get started on the Wedding Pi shawl so I could finish it in time!)

Second: WIP Wrestling #2, Manly version of Oktoberfest socks, a kit from the lovely and talented duo of the Tsock Tsarina (designer) and Jennifer (hand-dyer of the Flock Sock yarn, on excellent terms with the Yarn Fairy, and the source to buy the kit).  These socks were derailed last year when I sliced my left knuckle open to the tendon, which then had problems healing. I was working on these socks (sock #1, actually) at the time for my father’s birthday. However, I couldn’t knit well for quite a while after the bowl-attack-incident, then when I could, it was only with bigger needles, English style, and low tension. The reverse Irish knots in these require some tension to do, and it was a month or two before I could return to knitting in this style without pain or fear of splitting the cut open again. In the meantime — my husband, who is (no doubt laudably) more into cleaning than I am, had packed the kit away — in cardboard boxes with some yarn. Not only that — the sock and yarn were in one box, the directions in another. Eventually (very eventually), they were found and reunited — all except the creamy white yarn for the ‘foamy’ ribbing, which had been put elsewhere! That showed up very eventually too. Now to remember how Lisa had laid out her new, hot-off-the-press, galvanized by our email conversation “Manly Barleycorn” variation of the pattern. OK, found it in my old emails. But I (blasphemy!) modified her variation slightly! What was it I did, again? Plus, I changed the size of the pattern from large to medium width to fit my father’s foot better, so had to remember how that modified the directions. What you can’t see well (by design) in the picture above, is that after all its travails, the yarn cake of the second sock has now devolved into a demonstration of entropy (i.e. a tangled mess which had to be dealt with before any knitting with it could be done). My poor father’s birthday that I was planning these for was LAST September. My primary WIP Wrestling goal was to finish these before his upcoming birthday….

The third project is a new design; I’ll tell you more about it when I show you the finished picture, but it’s inspired by but is not a copy of the Morning Surf scarf; it’s actually more directly based on a variation of Barbara Walker’s Seafoam stitch, and involves handspun from fiber hand-dyed by my favorite dyer (no, I didn’t spin it); so this is entered in the Designer Dash, the Handspun Heptathlon, and the Scarf — Something, I can’t recall right now!

SO: At the conclusion of the Olympics, you will see if I achieved my lofty goals!  (Umm; really lofty!  At least as far as lace!)

Onto (practically) a month of Saturdays:

This morning’s Saturday Sky with moon. 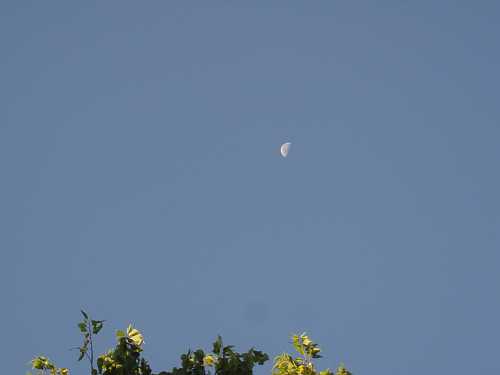 Below, the Saturday Sky two weeks ago, right before the start of Family Camp. Taken as I sat and knit by the shores of Little Boy Lake, Minnesota, as above, on a gorgeous day:

and a view looking out over Viking Point as I knit later that same afternoon:

Last, the last day of Family Camp, another gorgeous day as we got on the road: 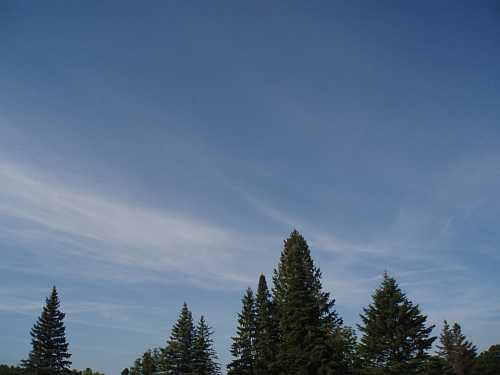 I have so much to tell, and so little time to write — in fact, work calls right now. See you after the Olympics (and Ravelympics) end!

7 responses to “A Month of Saturdays — and Knitting for Ravelympics 2008!”