Steamin’ down the Mississippi, floatin’ on the Frog Pond

So, I have too many pictures to share from our Riverboat tour of a couple weeks ago, to settle for putting up just the one from the ABC-Along M post. Settle in, a bit, if you have time, for a few more! Then, subsequently, a short tour on the Frog Pond in memory of projects that have gone astray.

I won a dinner cruise for two at a raffle for charity (for children’s advocacy), on the Julia Belle Swain, as I mentioned. She’s a reproduction steamboat, but authentic as far as being a truly steam-powered paddlewheeler. As Lorette mentioned in the comments, she had a song written about her. And she’s beautiful, inside and out.

Lots of gingerbread and interesting details everywhere. (Click to embiggen as desired.)

The bar is gorgeous! Look at the boat’s name carved into the windows.

We left from Riverside Park on a glorious early summer evening 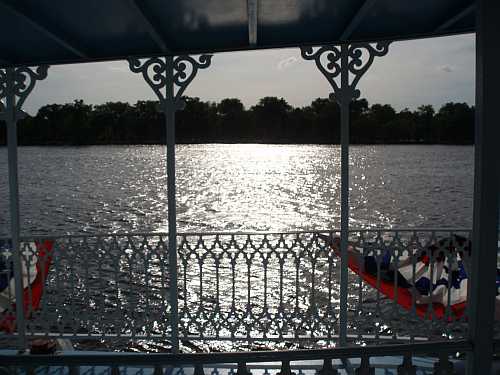 past the Pettibone Beach House on the other side of the river. 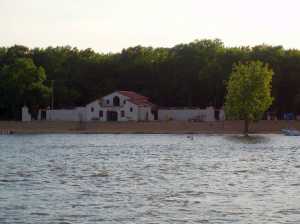 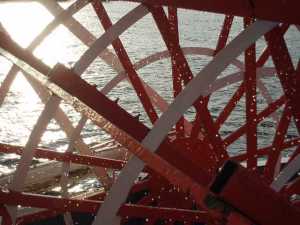 We took a two hour trip, downriver first. Under the bridge(s) I mentioned that required the mayfly redesign; once one bridge, now as of recently, two. They look beautiful together. 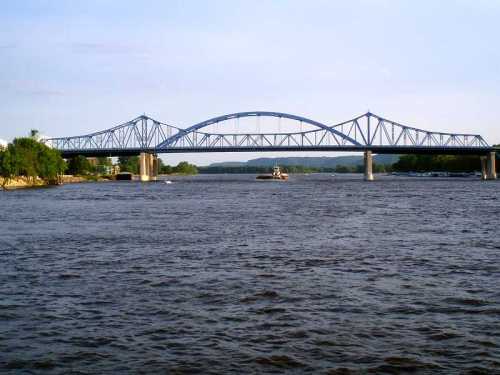 For most of the way, the riverbanks looked the same way they must have when Mark Twain piloted a steamboat up and down the Mississippi. About which he said:

It is strange how little has been written about the Upper Mississippi. The river below St. Louis has been described time and again, and it is the least interesting part. One can sit on the pilot-house for a few hours and watch the low shores, the ungainly trees and the democratic buzzards, and then one might as well go to bed. One has seen everything there is to see. Along the Upper Mississippi every hour brings something new. There are crowds of odd islands, bluffs, prairies, hills, woods and villages–everything one could desire to amuse the children. Few people every think of going there, however. Dickens, Corbett, Mother Trollope and the other discriminating English people who ‘wrote up’ the country before 1842 had hardly an idea that such a stretch of river scenery existed. Their successors have followed in their footsteps, and as we form our opinions of our country from what other people say of us, of course we ignore the finest part of the Mississippi.
– interview in Chicago Tribune, July 9, 1886

The barges may look a little different now, though,

and I don’t think houseboats pulling up to sandbars like this were common in Mark Twain’s day. 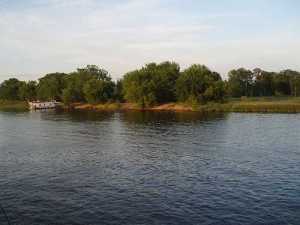 The authentic calliope played for us en route: here is the console

(nb: Not playing during picture! I wouldn’t have been so close if so.)

As the sun set, it was time for big and small craft to turn towards home port.

And back under the bridges.

What a wonderful evening. If you’re ever in the area….highly recommended!

Much less photogenic will be our brief tour of the Frog Pond.

So, I have started a certain meeting/walking sock 4 times now. The last time you saw it, perhaps, it looked like this: 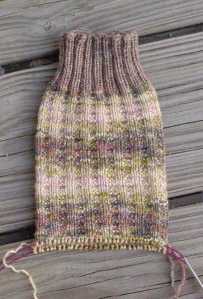 It’s a very fine sock. It’s just still too small. This is my relative lack of sock experience showing. What worked for me, and was wide enough on a shorter cuff, was too narrow to get on comfortably when I lengthened the leg of the sock to a length suitable for a gentleman.

I’m also playing with the stitch pattern. Above is a barred rib; 2 rows k2 p2, 2 rows k. I like it. But I thought I’d experiment and see what happened with 3 rows ribbing (k2p2) and 2 rows stockinette. I thought it might be more elastic, have slightly more of the nature of ribbing than the above. Not enough to see the full effect, but I’ll post a picture when there’s a bit more done. (Do you get a mental block, like I do, when you’ve frogged a project, especially more than one? Sometimes it’s just hard for me to get going on it again….)

This is just NOT going to work.

I had hopes, but it’s not a good venue for this lovely yarn. The way the pattern works, you knit double-stranded k2 p2 ribbing for most of it; for the gathered areas, you temporarily go down to one strand and also work in the round with slipped colorwork, with a second color. There’s a chance this yarn could work with this pattern if you held it together with a coordinating simple second strand, say in green, and then used that plain strand for the colorwork part with the contrast yarn. But in general; no.

This is 150 g of ‘long color repeat’ Duchess from Twisted Fiber Art, which cries out to me to be made into something special. Not just any scarf.

Here’s something I just ran across on Lime & Violet’s Daily Chum. It just might work!

I wouldn’t do it with the different colors, I would just use the lovely hand-dyed yarn and it would ‘V’ visibly automatically with the color changes. The yardage is right, and I could consider using the contrast yarn for the lace edging if I liked the look.

Once again, I’d have to try it to see if I liked it. But it could work.

Or maybe a plain Jane tank top would be best (sigh).

Have you been to the Frog Pond lately?