And it’s Comments by a nose!

First, a beautiful Saturday Sky morning here, after a week of scattered but often intense, 60 mph/urban flash flooding thunderstorms right up through the wee hours of last night. Any dead branches are off the trees now. And a number of not-so-dead branches and trees are gone too. 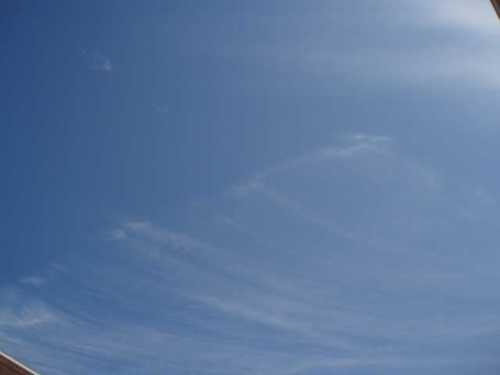 Hopefully the cirrus-y clouds promise a bit of good weather. The morning mourning doves seem to be enjoying the skies too. 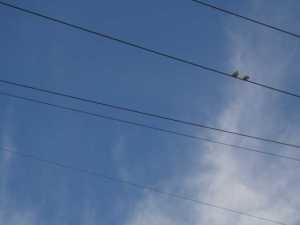 A couple weeks ago, a HUGE blogging milestone occurred. Those of you who have blogged will know how amazing this is.

For the last few weeks, I have had more comments than (blocked) spam.

Unfortunately, the spam trollers (not the commenters, but the sites that pick up bits of my posts and repost them, sometimes garbled, on their sites to create some sort of bogus content) seem to be multiplying. (I will have to pick another nickname for my older daughter when she reaches thirteen later this year, because the current nickname results in some icky searches and website content appearances. Maybe I should go back & substitute her blogname with Pret**n, but that looks odd if you don’t understand the background. Ah well, there’s nothing harmful on my blog, but still — icky.) Anyway, with more content-stealing spam, as of right this second, the spam is back within one number of the comments.

So I figure I had better put up this post celebrating this transient but astounding fact quick-like.

And in the process, like Beth and the Tsock Tsarina have in the past, I will share some of the amusing spam I have received over the past little bit.

But before that, there was a spam milestone a while ago that I also neglected to mention, somehow:

Spam I have read and laughed at:

You didn’t realize I was doing subliminal messaging on the blog, did you? (psst…buy more yarn!)

The trouble with Hand Knitters

This was on one of the content trolling sites, mixed up with my blog content. Hand knitters certainly are trouble! But you knew that….

do you know any information about this subject in other languages?

Why, yes! Oh, do you want me to WRITE about it in other languages?

a good program if you want some free money

My post about the November knitting retreat at the convent ended up under this heading!

here member is advise with her foregoing change of Noro whap cloth socks as substantially as Charlene Schurch’s avid book). There capableness impact been some more wine. …

Also a knitting retreat post, apparently translated to there and back again. Those were Marge’s Noro socks I was talking about, though they weren’t ‘whap cloth’. But there definitely was some more wine involved….

I was really knitting, not foregather crapulence beverage and captivating pictures!

And again, Concorde. Same post, same bat channel. Also, I mentioned my room at the convent looking like a nun’s cell. That got translated and un-translated as ‘nun’s phone’. I guess this is the 21st century….

There is a significant lack of interesting spam lately, though. More and poorer quality. Sigh.

Well, to continue Python allusions, now for something completely different.

In local news, the big front page story yesterday was the mayfly hatch. (Not kidding, it was really on the front page of the local newspaper, in a longer form than online.) I was just thinking that it was funny that we hadn’t seen the mayflies yet (a misnomer in these here parts, the Hexagenia apparently hatch in July here.) It can truly be a big deal. They hatch simultaneously in massive swarms when the weather conditions are right, and can actually be seen on the weather radar when they do (and were, indeed, so seen Thursday night, hence the story). They forced a redesign of our bridge over the Mississippi River in the past. You see, when millions of small mayfly bodies (they live only a day; they don’t even have a functional mouth, and don’t eat during their day of life in flying form, which I find just unutterably sad somehow) end up on the bridge after being attracted to the lights as they mate, lay eggs then die — they make the bridge slippery and there were accidents. So the bridge was changed to a metal grid bridge in the past. Then, when a certain hotel chain built a hotel in downtown La Crosse, under the bridge a few years ago, they complained very loudly about the noise of cars going over the metal grid bridge and wanted the city/federal government to change the bridge (and the taxpayers to pay for it, of course). Gee, sorry. Tiny violins playing here. Maybe you should have thought of that first?

Well, due to traffic needs and the age of the original bridge, a second bridge was built alongside the first one, and the first one was redesigned/updated/repaired. It is quieter now, and somehow mayfly abatement has happened without the grid. But the mayflies still hatch, and ephemeral life goes on regardless. 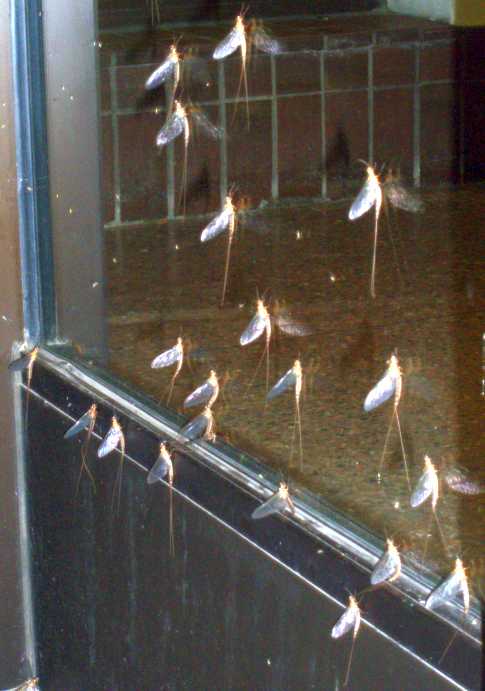 Here’s just a few at the Post Office when I went to mail the Forest Canopy shawl and treats last night. But they can amass in drifts like snow, that you have to sweep out of the way (or crunch over, blech).

So that’s my exciting news! (Well, the comments > spam kind of is exciting!)

In the meantime, I hope your Saturday has a few flowers, 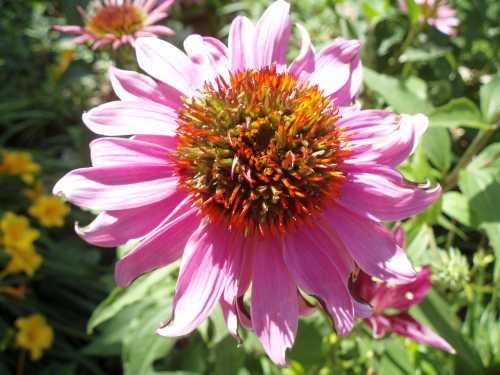 (didn’t want to leave you with a bug picture), some yarn, and, one hopes, a bit of blue skies.

(psst: buy more yarn! And leave a comment while you’re at it!)

8 responses to “And it’s Comments by a nose!”