OK, after Chris posted the photo she posted today (go look, you’ll know which one I mean!), tonight seemed to be the right time for the great Toilet Paper Cover reveal. (Here’s the TP cover sneak preview, to whet your appetite.)

(But don’t get too worked up. It’s really not worth it. Really.)

At Blue Moon Fiber Arts Sock Camp, we had homework. Last year, the campers had to knit a chicken. This year, the theme being Camp Crows’ Feet, some of us were, I’m sure, thinking we’d be knitting crows or something crow-related. But NOooOO!

Instead, Tina, dyeing genius behind Blue Moon Fiber Arts, sent us a bag of assorted yarn with instructions to use all the yarn and create a toilet paper cover (using any of the fiber arts). We could add other yarns, but had to use each of the yarns we were given. My lot included some truly ‘wonderful’ fun fur/glitzy novelty yarn, several colors of some ugh rayon-ish yarn (hard to knit with), some thick variegated yarn, and some short ’emergency sock yarn’ skeins of Socks That Rock (last years’ sock club yarn colorways).

You know, I don’t crochet. Most TP covers I saw back in the day were crocheted: a good art form for 3-D objects requiring sturdiness. And my creative juices was just not cranked up by this project. But, after a while, I had a vision of a felted black TP cover as a back drop for lace patterns in the various colors and weights of yarn I had.

So I dug up some stash feltable black yarn (hooray for stashbusting!), and made a cylinder that I hoped thought calculated (yeah, right) would be the right size after felting. And felted it at almost the last moment. It got a bit smaller than hoped calculated, so I stretched the heck out of it as I blocked it over a kitchen canister (mmm brown sugar!). My thought was to knit the lace right onto the black TP cover, to avoid sewing it on and to be sure it was the right size, but I abandoned that after knitting the top on; it was too hard working around the corners, and turning the cover all the time. So I decided to knit the lace for the ‘cylinder’ part of the TP cover separately and sew it on. Also, I had bought a pedestal for the cover because it appealed to me, and planned to knit a lace cover for that. As well as socks for it. (Socks? You’ll see momentarily.)

It was going fine till then. First, I basically ran out of time for the pedestal part, but I handed in the project just a touch late so I at least could COMPLETE my artistic vision even if it was not completely FULFILLED. But also, in knitting the lace ‘sleeve’ for the TP cover separately from the cover (which at this point was packed in my luggage, as I was knitting this on the plane, the bus, and the ferry), I failed to take certain things into account.

I was knitting an unvented lace pattern, which needed to block out a bit to show up against the black base. I had no identification on the yarns, other than the Socks That Rock. I now realize the yarn that was no fun to knit with — because it had no resilience — was telling me something. In fact, shouting at me. No resilience? Probably not going to block out like wool does!

So if you take something that does not ‘block’ and has no resilience, and you pull on it one way to get some stretch to see the lace pattern, what happens? It gets smaller the other way! Think of a so-called Chinese finger trap! So the lace sleeve which I measured as fitting, when I put it on the TP cover with enough stretch to show the lace pattern: suddenly shrank to half its length. Oops. And I had run out of time. Double oops.

So my TP cover did not live up to the vision in colorful lace against black, which I had envisioned in my head. See below. But it was completed, and the rules were followed, and great hilarity ensued. Which I will tell you about at another time, because it’s late. But not tomorrow, because I have something else happening. But soon, I promise!

Without further excruciatingly wordy ado, then, here it is: 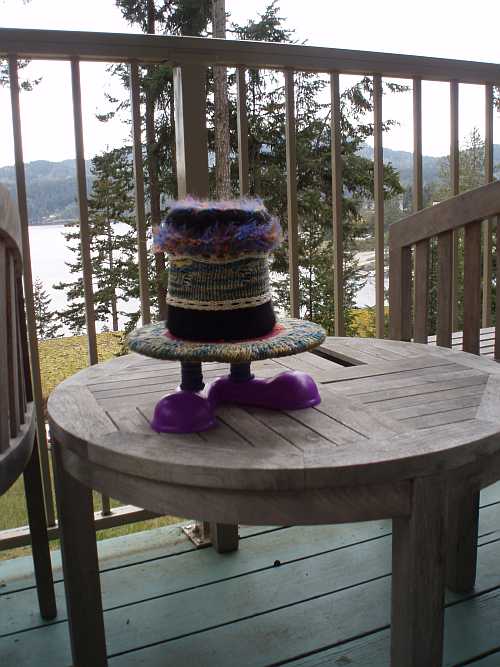 (Posing on my balcony of my room on Orcas Island.)

Click the following to embiggen if you wish to see my make-it-up-as-you-go-along lace.

Now I’m going to make you take a closer look at these, because it’s the only part of the creation that I really like: The Socks!

with one-row Spiral Stripes as a way to blend two very different yarns, one of which was wildly variegated.

(I just gave my mother the footed platter for her birthday. Sans TP cover; I wouldn’t do that to her. But I got a kick out of the ‘footed cake plate’!)

There, Astrid. Finally, the finished product!

I told you I wasn’t sure it was worth the wait!

Some people are TP cover geniuses, however, and left me awestruck at Camp. Soonish, I’ll tell you and show you the rest of the Camp Story. That will be worth the wait, I think.