So Nora requested/suggested Forest Canopy updates from her herd of lace-knitting cats.

Here’s mine to date, though I’m not done like Nora and Joan:

As I said yesterday, fun, relaxing, easy to keep track of (not that I can’t mess up, especially since I knit it at bedtime). This too will go with me to Sock Camp. (I think I’ll have room for a few clothes in the suitcase too, with the knitting. And the homework. And the swift and ball winder. No, not kidding about the last.)

Funny how, though it’s called Forest Canopy, it looks like one of those plastic topographical maps from grade school when it’s not pinned out severely.

(I wasn’t going to pin it out, but the first picture looked like an ad for Manta Ray Rescue.)

And, driving to work today, I was reminded about Nora when I heard that the mayor of Milwaukee is proclaiming today Beer Day!

(It’s the 75th anniversary of legalization of beer delivery after Prohibition. And Nora lives in Milwaukee, for those who may not know.)

(We needed beer today for fortification after s**w fell from the sky again. I don’t want to say its name, to name it is to call it. )

I also thought I’d blame give credit where credit’s due, and tell you that I walked 10 miles last week, inspired by Nora as well. So my sore thighs know who to talk to!

And I happened to have my camera with me on a couple of those days, so here’s a selection of Walking pictures from the last few days.

It was a frosty foggy morning the one day, 31 degrees Fahrenheit, and a certain robin was not happy about it.

Doesn’t he look disgruntled, even from here? I got closer, and I assure you, he was not a happy bird.

Here’s an action shot, more or less, of knitting and walking (well, yes, I had to stop knitting to take the picture):

And there are still snowpiles in the shadows of the buildings, but most of them are not as big as the one in Lisa’s yard, and nothing like the one she drives by every day (contest alert, check it out!).

I love seeing people’s houses and yards. Look at these front steps:

These trees remind me of a lace pattern I’ve seen, but it’s not coming to mind. 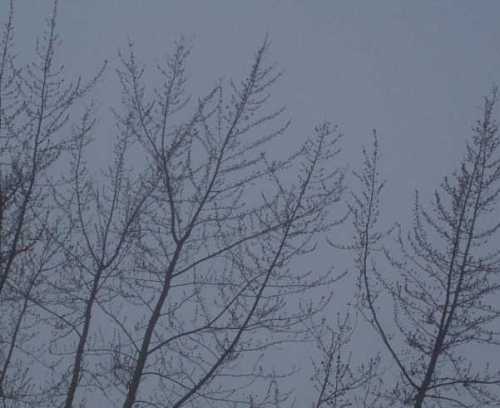 One evening, I walked downtown from work for a dinner, downtown being along the river (The River in this context being the Mississippi, though our city is at the confluence of three rivers). So here’s a river shot — for Nora!

Can you see the Dead End sign? I should think so, dead end!

A little farther on, herons of some sort (almost certainly Great Blue Herons) flying over the bridge:

You can get a hint of their legs trailing out behind, that’s the clue that they’re herons. Big birds.

Here’s the bridge they’re flying over.

And, since the sun is getting low in the sky, I’ll leave you with that.