In response to Kay’s prompting, here is my entry for The Grandma Mabel Memorial Recipe Box Show and Tell Contest. 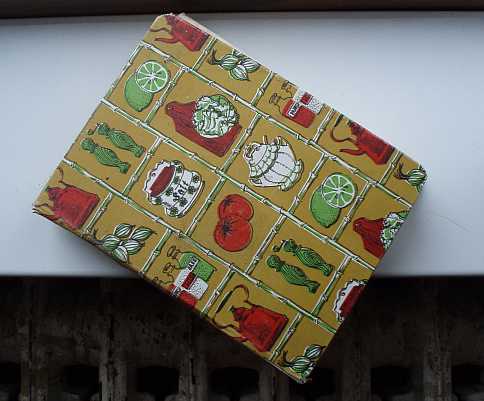 Just look at the cool Harvest Gold outside with Avocado and Tomato Red accents.   (It dates from the late 70s.)  The inside is pretty cool, too, as the binder has envelope pockets and looseleaf paper.  And on the inside front covers, handy-dandy conversion charts, tables of weights and measures, and common cooking times and temperatures for various baked goods.  (Click to biggify if either you would like to refresh your memory of what a ‘slow oven’* really signifies, or to see the hidden bonus recipe!)

But here’s the recipe I’m officially sharing.  Based on the handwriting, I wrote this down in high school.  It’s still a favorite, and oh so easy!  Even though right now we are all surfeited on cookies and bars (I tried to type bookies and cars, oops), it’s still appealing.  I love toffee….

Here it is transcribed and edited.

Replacing half the chocolate chips with butterscotch chips is also rather yummy.  Not the best bar to take to a Fourth of July picnic as the topping gets melty, but then that’s true of most chocolate.  Tasty all times of year, however!

Speaking of recipes:  Here’s the Gothlet with one of her Christmas presents from my folks:  Joy of Cooking!  I got mine when I left home, but both girls enjoy helping their father cook (he’s the real cook in the house!) so they got their own copies already this year.  The Gothlet is snuggled up in her brand new Snug Sack, also from Grandma and Grandpa, reading her cookbook. 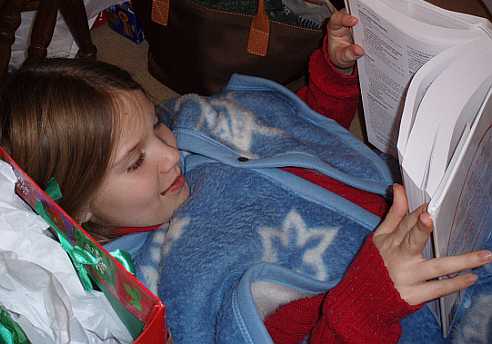 *One of the cookbooks I used growing up was the “Household Searchlight“, still in my mother’s possession, which was owned by my great-uncle Jim when he was a cook for a Civilian Conservation Corps camp during the Depression.  The cookbook was full of terms like “slow-to-moderate oven”.  I remember the sugar cookies I made from it turning out rather inedible.  My fault, no doubt, as well as some things not translating so well into modern kitchens (my oven was probably not set at slow-to-moderate!).   But it had great household hints and some classic recipes.