Now WIP it
into shape

shape it up
get straight

try to detect it
it’s not too late

Well, these are Works In Progress all being worked on in the last week. And they all have a tale of shame to tell. Not one of them behaved as I thought they should. (I don’t have time for this, people!)

So take the first project (OK, OK, technically it’s an FO — because the ends are woven in and I’m not going to reknit it! Partly because I don’t know how to make it behave better by reknitting.). This is a linen washcloth from mill ends of Louet Euroflax, in the classic garter stitch diamond, finished with an I-cord edge (because I had a small length of the darker linen, and just felt like it). 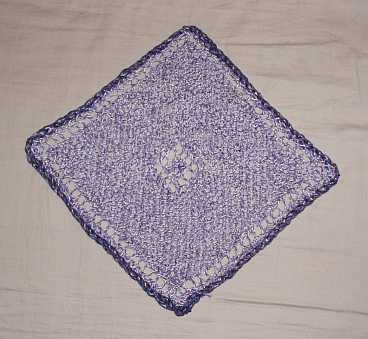 Not too bad? Well, here’s what happens when it’s not stretched out: 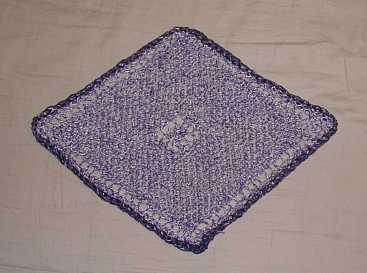 No, this is not a perspective shot; it becomes a rhombus rather than a square. Why did the classic garter stitch diamond fail me? As I knit, the garter stitch assumed proportions more like stockinette, shorter in height than width. Was I knitting too tightly or loosely? Was it the linen? But I knit these in cotton all the time, which is if anything less resilient than linen. Sigh. The world may never know. I’m going to try washing and blocking this severely. But I have a feeling that, like the famed cat of song and story, it will come back the way *it* wants to.

OK — what’s wrong with this? 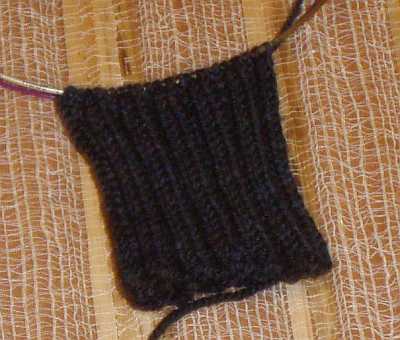 A fingerless mitt following my basic pattern, from Dream In Color Smooshy sock yarn, “Black Parade” colorway (like the new Raven Clan colorways from Blue Moon Fiber Arts Socks that Rock, it’s not really black, it’s many colors overdyed on the black, so extremely cool). Well, in and of itself, it’s just fine. But somehow, while in my bag, the pair of scissors that was also in the bag cut the yarn. So it needs a bit of repair. Not too bad, though. 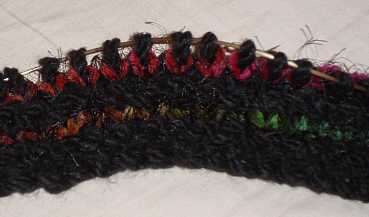 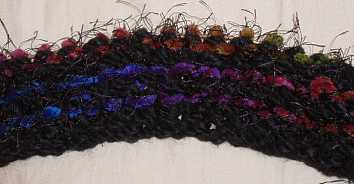 Actually, I’m kind of liking it now, despite the fact that it looks like a mutant paramecium on the needles. (A Giant Multicolored Mutant Paramecium.) This is a side-to-side scarf, knit with Schoeller Stahl Big Ball yarn (bought ON SALE at Herrschner’s!) and Little Mamma novelty chenille/eyelash yarn (bought ON SALE at Mary Maxim!). (Just pointing out that I occasionally shop other places than elann, The Loopy Ewe and WEBS! And LYS’s of course.) (And obviously, you already know that I find it hard to resist a sale….) The issue with this scarf is that I tried four or five different permutations before coming up with this one that I liked; multiple now-frogged variations of the multidirectional scarf, a plain garter stitch scarf, and a bias garter stitch scarf, etcetera, etcetera. With all that frogging, the Little Mamma yarn is now a mass of colorful fuzzy spaghetti. (Meaning tangled, it’s otherwise held up OK.) But now I like what I’ve finally come up with, and it’s knitting up fast. It’s not quite garter stitch; I’m doing two rows garter stitch and two rows stockinette, basically, as I like the way the colors stack up on both sides then, as in the detail shots above. 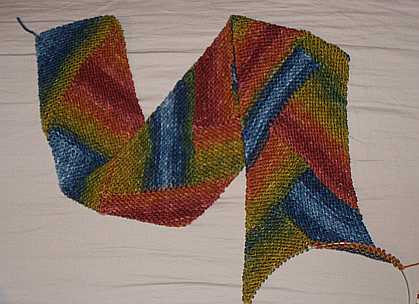 Think that’s enough yarn to finish it? Right you are, no, it’s not! (Of course, I had to keep knitting and prove it to myself.) So it’s sitting next to me as I type this. I do have another skein of this yarn. Do I splice on just enough yarn to finish, or do I frog back a ways and reknit? (Hint; splicing will take less time and the scarf will not be shortened thereby. And I hate reknitting if not absolutely necessary. Hmm, tough call.)

OK, here’s the hat of shame.

It looks, not perfect, but perhaps not awful in this first view (I have a big head which makes the hat look even smaller than it is.)

Till you catch the elfin view from above, anyway:

But here it is, laid flat, looking like Timothy Leary was about to put it on and head out into a sou’wester. 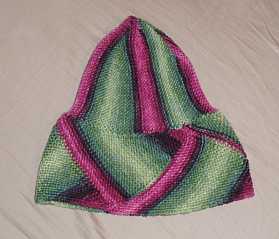 Or, with the brim folded up, it looks like a wardrobe item for Will Farrell playing Cindy Lou Who playing an Elf. 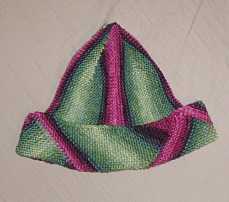 Date with the Frog Prince coming up.

Why did it all go so badly?

The multidirectional scarf pattern, which I used as the brim (to match the scarf), doesn’t fold quite evenly, though that’s not really responsible for the hideousness. But something about the construction of that pattern versus the construction of the short rows for the crown, resulted in a tighter gauge for the crown. And, also, if you decrease at a constant rate all the way to the top of a hat, it will tend to come to a point. (Of course, if the gauge were looser, it would be stretchier and more forgiving, so less obvious when on a head, anyway.) This is the construction of the original hat I borrowed this from. But whenever I make a hat in the round, I decrease FASTER for the second (top) half of the crown, which rounds the top nicely (i.e., as a general rule of thumb, I’ll decrease every other row until I have roughly half the number of stitches I began with, then I decrease every row to the end). So that explains the elfin shape. Last thing I learned, which you need closeups to see: 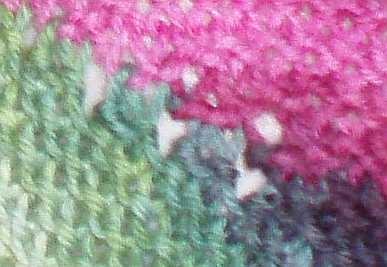 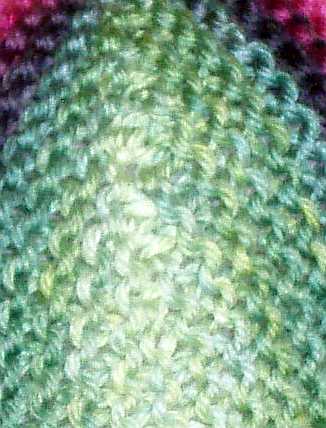 The first picture is of garter stitch short rows without wrapping, which I am told is perfectly acceptable, and indeed what the original pattern says to do. However, when stretched on a head (or in the picture, over my knee), there are definite holes which I do not care for. I think you can get away with not wrapping for something like a garter stitch sweater where the fabric is not under a lot of tension, but not (in my opinion) here. So I tried wrapping the short row stitches, which was better but not perfect; then I used a double wrap technique as seen in some short row heel directions, and that resulted in the second picture. Much happier.

By the way, I didn’t just follow the original pattern for several reasons, an important one being gauge differences with this very different sport weight yarn compared to double-stranded worsted, but also I tried knitting the hat longer and in one piece, as in the original Tychus, and it made the stripes very narrow; fine in general, perhaps, but much different-looking than the Ravelry scarf.

I post this so you can laugh at me learn from my mistakes. My plan is, obviously, to rip this out, first!, but then to knit the hat brim to fit using a simple bias garter stitch diagonal; then calculate how many short rows to do to fit the number of rows on the brim; I’ll consider using a size bigger needle on the crown; and change the short rows so that instead of [*wrapping* and] turning every two rows, that I w&t every row at the beginning, then change to every two rows in the middle of the short row ‘wedge’, then back to each row; to try to create a nice rounded crown.

(I don’t have the brainpower or the time right now, admittedly, since this is not planned as a Christmas present. So the thrilling sequel to the mutant elf Ravelry hat will happen in January, I expect. But I am determined to make this hat work! I am a Twisted yarn-obsessed knitter with a mission! Watch out!)