Well, two pairs of FOs, but it all counts!

I finished the first pair of socks I ever started!

These were started, then were put aside, then misplaced, then found but neglected for more exciting projects — it’s been years. (But they were not my oldest UFO: that will come out when Beth asks us to show our oldest UFOs in the near future. If I can find it….)

This is a Knitty pattern, Straight-Laced. Yarn is some old vintage Paton’s Kroy sock yarn, 75% wool, 25% nylon. Knit two at a time on two circular needles. I got better at the technique of avoiding Gordian knots by the end. My gauge changed sometime in the last four years, fancy that, but it didn’t make much difference (the top, where I started, is looser than ideal, but given the ribbed laced, it still stays up). Hey, I’ll wear them, imperfect though they be! (My current socks are much better, though.)

Another view, hangin’ out with the socks on the front porch in the brief glimpse of sunshine we had between the rain showers: 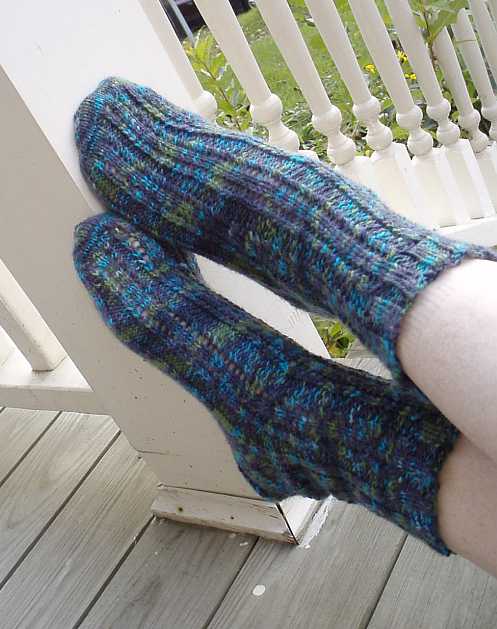 Yesterday, I finished a modified pair of Piano Mitts for my husband. They’re for him to play guitar when it’s cold (which he was supposed to do this weekend, play outside, but rain cancelled the music part of the event). So I suppose they are Guitar Mitts. He wants them this short so they don’t interfere with playing; I would usually have knit them to at least cover the knuckles. He graciously modeled them despite his aversion to paparazzi: 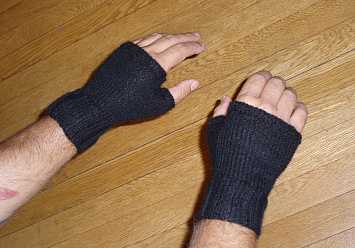 They are the same elann Baby Cashmere which I first knit these mitts in, very light, soft and warm; my own pattern.

My next project is a wedding shawl for my friend and pastor, who is getting married in less than a month. I am designing the shawl, following Elizabeth Zimmermann‘s Pi Shawl basic framework, but putting in a different lace pattern between every increase row. It will either look hideous or wonderful. The yarn is certainly wonderful; I’ll show you that tomorrow when I can take pictures of it. The yarn has its own story….

I have been thinking about this shawl for a long time. This weekend, I sat on my bed surrounded by lace books and stitch dictionaries, scribbled notes and calculations (I forgot to bring the calculator up with me). What’s ironic is that with perhaps 15 to 20 books that I was looking at, I ended up taking all my stitch patterns out of Barbara Walker’s Second Treasury of Stitch Patterns. (There were a couple in vol. I and vol. III that were contenders, but they didn’t make the final cut.)

I still have a couple final decisions to make about which patterns and which order; I’m going to photocopy the lace patterns and cut them out and rearrange them so I can see which I like next to which; the patterns should harmonize as far as style, but not be too similar one next to another, and with either roughly equal openness, or alternating a little more open with a little less lacey perhaps.

Also, as I convert patterns written for flat knitting to knitting in the round, I am becoming fonder and fonder of charts. (It’s easy when the wrong side rows are just purling, of course, but was I thinking about that when I made pattern choices?? Not on your sweet bippy!)

This will be my obsession for the next three weeks; I’ll have to put my ISE 5 scarf and even the Oktoberfest socks aside for a bit. I’m really excited to finally be knitting this shawl after thinking about it so long.

Here’s the Flower of the Day: 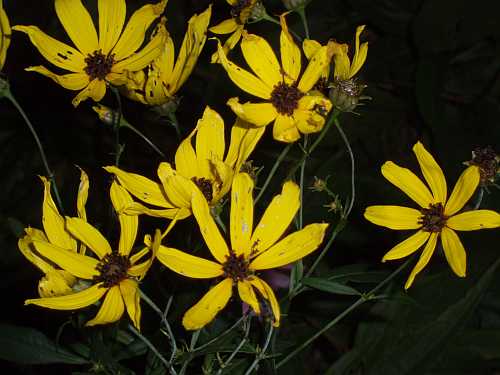 This entry was posted in Fingerless Mitts for Fall KAL, Flowers, Knitting. Bookmark the permalink.