Here’s the ‘experiment’ I’ve been muttering about!

Remember these skeins of yarn I dyed last week?

These were a sport-weight merino, dyed in the skein (lemonade on one end, strawberry or something on the other; dyed by standing them on end in a glass jar and microwaving/boiling the yarn and dye; then dyeing the other end in a separate jar).

I goofed up, though; I didn’t soak the skeins before dyeing, so the dye didn’t penetrate much at all except on the ends and the outside layer.

So the inside was still cream-colored, and the outside was bright candy colors.

I thought about how this ‘mistake’ would look knit up, and decided I could use the change in colors to my advantage; if I started with the plain vanilla inside and knit a toe-up sock, there should be increasing color intensity as I got to the cuff. And two skeins = two socks; I really wanted to do toe-up, though, as I wasn’t sure how big the socks would be, and I obviously wanted to use every bit of yarn. (If I had only one skein, I would have made a hat; probably starting at the top of the hat with the outside, colored yarn and knitting down; just my preference.)

Fortunately, the skeins allowed for easy pulling from the inside (I could have rewound them too). I chose a plain stockinette sock, which usually bores me, but the color changes kept me amused (plus sport weight goes so fast!). I tried two different heels, a short row heel and a heel with another skein of the undyed yarn, but didn’t like the color effects of either. So I used Wendy‘s new gusset heel, to minimize the color shift on the front of the sock by using the least possible yarn for the heel turn. And . . . here is one completed sock and the beginning of the next: 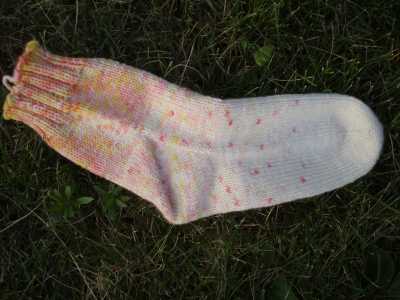 I think it turned out rather well! The little flecks of color remind me of that cake mix with bits of colored stuff (best not to inquire too much about what those really are), so I’m calling these the “Confetti Socks”. And I think these are for me! No one else will probably get as much of a kick out of them as I do. I’m just unreasonably happy with these. Though the Preteen tried one on and started making noises about how soft and warm they were. But she’s getting the Panda Cotton Fern socks, so there! (Well, eventually she’s getting them — slow progress given MS3 and Ribby Shell and Confetti Socks and baby hat and. . . .)

Here the Fern socks are at the moment:

The girls are off to Y camp today, and I’ll work on the Fern socks while they’re gone. (As well as MS3 and Confetti socks, etc., etc.)

Tomorrow’s Mystery Stole 3 Monday; I’ll show you then what else I did this weekend!