Happy Father’s Day to all fathers, fathers-to-be, and also to all daughters and sons out there!

For Father’s Day, my husband got to sleep in, and get BBQ for dinner at his request. I offered to cook (he usually does it as he’s talented that way) but he had a BBQ jones going on, and it’s hot and humid, so I was glad he wanted to go out to eat instead. My father also got BBQ for dinner with us — don’t know if he slept in! And of course, both were basking in the love of their families.

Knitting — almost done with the prayer shawl (should be completed tomorrow if not tonight), and packed up the couple things I have for the Dulaan project (I hoped to do more, but my attack of startitis has derailed any big projects).

Here’s the third pair of Magic 28 socks which are destined to keep small Mongolian feet warm, I hope:

I finished those earlier this week. Those tiny socks in worsted weight do go fast! I just have to finish one more wristwarmer for the Loopy Ewe Challenge (unless I decide to cast on one more hat — I have two done, which I just realized I had not yet immortalized in pixels. So I got up, took a pic, resized it, uploaded it; took me maybe 3 minutes — the power of computers once again! — here they are:)

The ribbed hat on the right, is one of the first projects The Preteen made. It wasn’t really meant to be toddler-sized, but hey, she did a great job. She just went ahead and knit a scarf for her friend instead of a hat (one size scarf fits almost all!) and now the little hat will serve a good purpose!

I’m excited about the Mystery Stole 3 project, but boy, all the posts on the Yahoo group are kind of out of control! Over 1500 knitters are already signed up, and many are commenting and speculating and conversing and translating, and choosing yarns and beads, and it doesn’t even start till the end of June! Wow!

Not that I’m not supposed to be swatching already. I did go ahead and buy beads (optional, but again, I’ve wanted to try this for quite a while, just waiting for a project that would benefit from beading. I certainly can see putting beads at the base of my notorious fingerless gloves [notorious because I’m always knitting one, it seems — or at least that’s what people think!]).

Here’s the garden with the early summer blooms just kicking in: 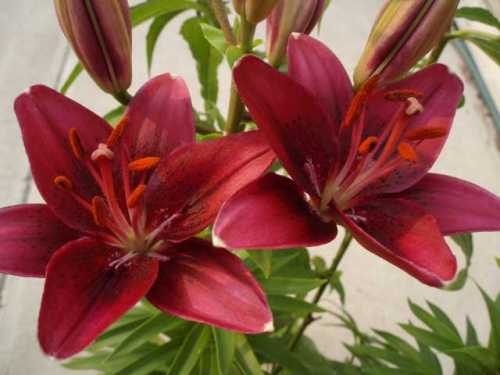 Love those Asiatic lilies in particular!